Enuma Elish: the Creation of the World

Bronze Age politics were cosmological. Tribes vied for the supremacy of their gods over those of opposing groups with each god ultimately reinforcing a harsh, often bleak, social order. The gods begat kings who demanded tribute. Monarchies were always cosmologies.

The god who eventually took the crown in the Western world was Jehovah, the God of the Hebrew tribe, who won out over the gods of the surrounding tribes, including those of Babylon. The Pentateuch of the Old Testament is a campaign document for Jehovah, just as the Babylonian creation myth known as the Enuma Elish from its opening words is propaganda for Marduk, the supreme Babylonian god. Since it is also a creation myth, it tends to be read in comparison to Genesis, which it undoubtedly influenced. 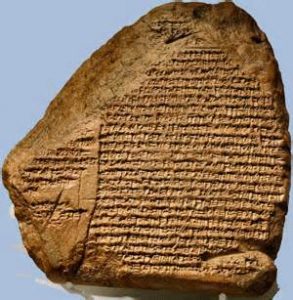 In the beginning, was sexual union. Nearly all early creation myths are sexual prior to Genesis. The Enuma Elish creates the earthly realm from the union of Tiamat, a chaos monster who represents the oceans, with Apsû, the fresh waters. As in the Greek Theogony, from the primordial chaos they bring the beginnings of form. And what an image of the male role during sex- flowing into the female and losing all identity in the deeper, vaster waters! From this mating, they created the younger gods who began to give form to the world from within Tiamat’s belly, beginning with Lahamu and Lahmu, which it is believed meant “silt” and “mud”, then Ansar (the sky) and Kisar (the horizon) and so forth- you get the idea. Their noise disturbed their parents, however. Apsû, in particular, hid from Tiamat and schemed with his vizier Mummu (who helped to give form to things) who said to him “Come, their way is strong, but thou shalt destroy [it]; Then by day shalt thou have rest, by night shalt thou lie down (in peace).” He can’t sleep, so he has to kill the gods in her belly. It seems likely that there is a threat to his rule as well.

Tiamat the mother, is clearly supreme, though, and she summons her children, in particular the most powerful trickster god Ea, to make war upon Apsû. When reading of Tiamat, who arises from the primordial chaos as the mother of everything, one is reminded of Jungian psychoanalyst Erich Neumann’s classic study of the archetypal Great Mother who combines attributes of goodness and terribleness, is numinous and all-powerful, and can provide or destroy depending on her whims: an image of nature. Tiamat comes to wreak horrific destruction in her war on her mate, as described in the unforgettable passage: “{Made in addition] weapons invincible, she spawned monster-serpents, [Sharp of] tooth, and merciless of fang; [With poison instead of] blood she filled [their] bodies. Fierce [monster-vipers] she clothed with terror…” Don’t mess with Mama.

Breaks in the tablets make the story a bit hard to follow. But, Ea kills Apsû and enslaves Mummu to become the supreme god, and then with his consort Damgalnuna has an even more powerful son, Marduk, god of thunder. In one somewhat creative interpretation, none of the gods can sleep and they implore Tiamat: “When they killed Apsu, your husband, you did not march at his side, you sat still. (Now someone) has created four fearsome winds, your belly is roiled, so we cannot sleep. Apsu, your husband, was not in your heart, nor Mummu, who was bound! You kept apart! You are no mother, you stir roiled around, and we, who cannot go to sleep, us you do not love!” It is also possible that Tiamat is threatened by Ea’s supremacy, stolen from his father.

She turns against him. Ea is crestfallen and horrified: “Tiamat our mother hath conceived a hatred for us, With all her force she rageth, full of wrath. All the gods have turned to her, With those, whom ye created, they go at her side.” He tries to rally an army of gods, while Tiamat creates 11 monsters and rallies her own army, led by her son and chosen husband Kingu, who she establishes as the supreme ruler of the gods. She also gives him the Tablet of Destinies, upon which the fate of all living things are decreed down to their appearance and living space. It also appeared in the Debate Between Fish and Bird. 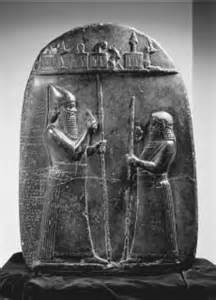 The gods who are against Tiamat finally appeal to Marduk to aid them and he agrees to, so long as they enthrone him as the supreme god. To decide on this, they have a banquet and get trashed basically: “They were drunk with drinking, their bodies were filled. They were wholly at ease, their spirit was exalted; Then for Marduk, their avenger, did they decree the fate.” He gets the nod and a throne. It is easy to win the love of drunken gods too.

Marduk creates new types of wind, such as tornadoes, with which to attack Tiamat and he encircles her as she rages out of all control, screaming incantations that do little. Finally, “He seized the spear and burst her belly, He severed her inward parts, he pierced her heart. He overcame her and cut off her life; He cast down her body and stood upon it.” After enslaving her soldiers, he splits Tiamat in half like a fish and uses one half for the sky, which is thus solid, and he creates the constellations from various organs, while the other half is semi buried under mountains and land but gushes forth the rivers Tigris and Euphrates. 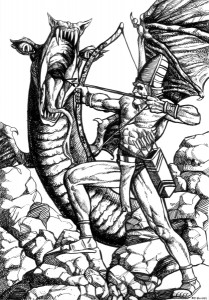 The enslaved gods come to pay tribute to Marduk and he establishes his new dwelling place, calling it “Babylon”, or the gate of god, and the story serves to explain the rise of Babylonian political power as well, with their tribe and god winning the battle for supremacy over all the other local gods.

From his blood, Marduk fashions mankind “who shall inhabit the earth that the service of the gods may be established, and that their shrines may be built.” Some readers see this as proof of the harshness of the Mesopotamian worldview that humans exist only to serve the gods. I tend to see the Enuma Elish more as a metaphoric history in which different bands of humans rise out of and violently subdue the chaotic and contrary forces of nature to create primitive societies, which are then consolidated under the political order of the strongest military force, which then makes their myth the official story. Thus, this is a story that will repeat itself throughout human history.

{Up next: The Epic of Gilgamesh]