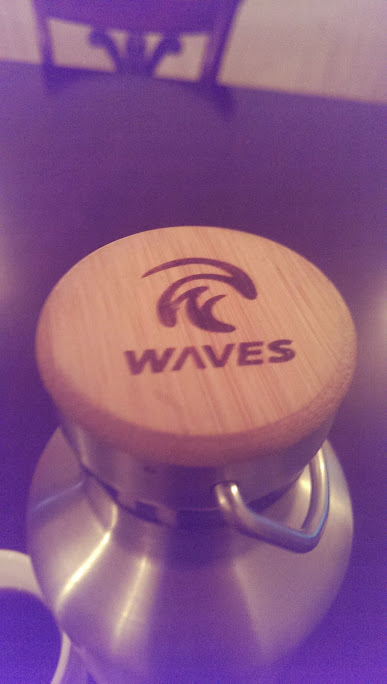 This Is A Bottle Cap

My Qualifications: It isn’t that I want to be a braggart but I am a human being who consumes both hot and cold beverages. I’m also a bit of a collector/hoarder – “He’s a hoarder!” my wife is screaming from the other room – of things that carry beverages, including my very extensive collection of vintage King-Seeley Thermoses. I’ll be signing autographs after the show.

Important Factual Information: As you’re all no doubt aware, doctors everywhere mandate drinking at least 13 gallons of water daily. This goes double for fitness fanatics, who are now expected to both drink from a Camelbak and guzzle from a Nalgene simultaneously if they want to have any hope of surviving their endeavors. If those seem to be a bit much for your life, there are other ways of hauling life-giving liquids around.

Enter the Waves Forever Cold Water Bottle is, which, according to the company’s website, is stainless steel and features dual-pane construction, which is definitely something might impress you if you know what that means, which I do not. It is big, holding 34 fluid ounces, which is a lot. It has a sizable opening, which the company claims allows for users to fill it with “even the biggest ice cubes” although this is plainly untrue, as this did not fit even a little. Most important to me is the company’s claim that this bottle keeps cold beverages cold for upwards of 24 hours and hot beverages hot for upwards of 12 hours. It also costs $39, which is a lot, especially when you pay $9 for shipping. 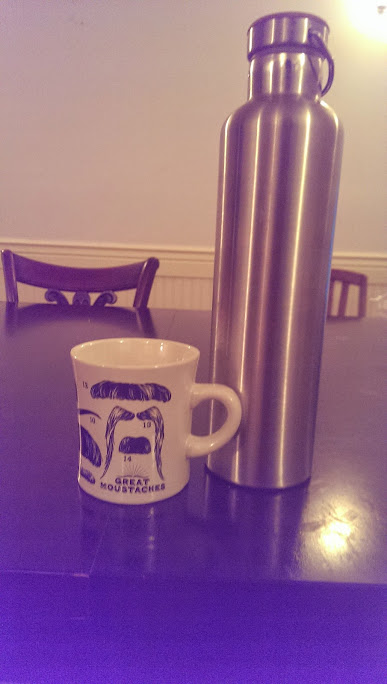 Scale Matters! This Is The Same Water Bottle Next To A Mug With Mustaches On It.

Testing: I ran this thing through the ringer, putting everything in from cold beverages all the way to hot beverages. That’s not really the ringer though, surely. There’s probably more than you’re supposed to do to a water bottle. From the company’s marketing materials, I get the distinct impression that an ideal customer is somebody who’s 26, has the day off occasionally, and goes adventuring, perhaps going so far as to have a Mountain Dew on the way to that adventure. But I am not 26. I am 34. And I was really only looking for something that would hold a lot of coffee in the mornings and a lot of ice water in the afternoons. I was also hoping for something that would clean easily.

I can also quibble with the company’s claim about it keeping liquids hot for up to 12 hours. Because yes, it might be able to do that, but this assumes that you screw the lid on after making your pot of morning coffee and then not opening the bottle again until that evening. If you’re repeatedly going back to the bottle, as one traditionally does when getting additional drinks from it which is what I would presume most users are going to do, the coffee will go from hot to warm to cold in far less than 12 hours. This shouldn’t be shocking necessarily but it does make me wonder if this company thoroughly thought through how its customers were going to use the bottle that it was selling. 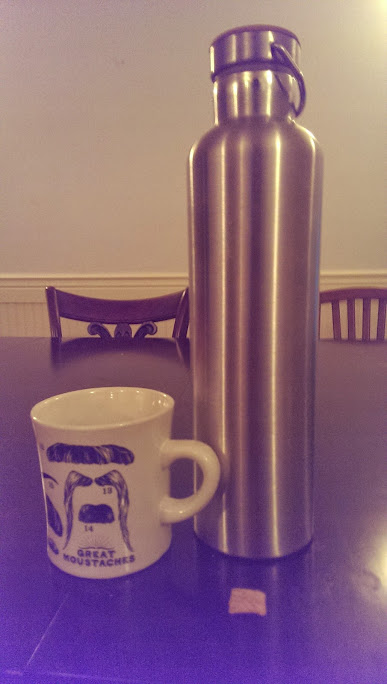 I Have Added A Single Piece Of Cinnamon Toast Crunch To Provide Further Illustration Of Scale. I Am Thorough In A Way That Consumer Reports Is Not.

Conclusion: This is a good enough water bottle that is too expensive. You’d be nuts to pay full-price (almost $50 with shipping!), especially when the company routinely offers discounts on its items. If you find one of those discounts though, I’d recommend pouncing, even if the issues with its heat retention are a bit of a disappointment. As I’ve written previously, most customers probably aren’t going to use it like I did, and I’m guessing that the company’s heat-retention claims were a bit of an afterthought. It will keep your coffee hot/warm/lukewarm for upwards of four hours, which isn’t bad, and it absolutely does keep cold beverages cold, which is probably more of its goal anyway.

You’ll also have a good customer service experience, as I can confirm after having a back-and-forth with the company’s CEO (who is probably himself a bit of a bro), a guy who was communicative and honored an expired coupon on the grounds that he was late in answering my questions about the product. That speaks volumes to me.