When I was 18, my mother insisted that I needed to know how to cook for myself.  She insisted that I know five recipes. My reaction was that of the typical teenager, and for posterity’s sake, it is archived forever on YouTube. One of the five was her very simple rice pilaf.

I am now 34. I’ve spent 16ish years making this recipe. I’m finally now getting close to making a functional variant of this. I don’t have a particularly good explanation for my own shortcomings here, except to say that all rices have always been my bugaboo. Things are better now – I only make this rice for example and never any other kind – but I still can’t shake the frustration of having taken so long to roughly approximate my mother’s approach.

A huge part of cooking is realizing how important subtle changes in technique can alter the outcome. Several months ago, I decreased the heat considerably during the rice’s two stages of cooking, meaning that it took me almost an hour to get it right. That though seemed to improve things slightly.

Then we cooked together a few weeks ago and I watched very carefully as she prepared this recipe. There’s a certain confidence that comes from having done something well again and again and again. Because she’s so certain of the outcome, she doesn’t doubt what she’s doing along the way. I realized that as I watched her make necessary alterations on the fly.

We’re going to start with the basic approach, but while writing it, I’ll note the places where variations can/should occur.

Step One: Let’s Get Some Ingredients 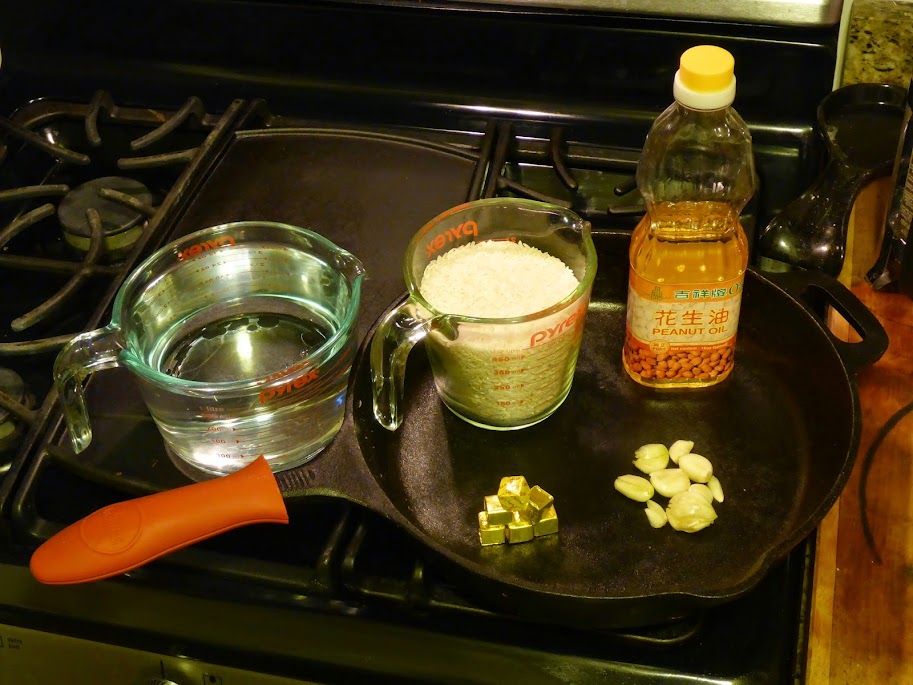 This recipe is beguilingly simple. You’ll need broth (4 cups of water, plus 4 bouillon cubes, plus extra water and extra bouillon probably), rice (2 cups), peanut oil, garlic, and whatever you’d prefer to cook in. I stuck with my skillet but a non-stick pan would work just as well here.

Although you can easily doll this recipe up, you should only do so at your discretion. These ingredients alone will produce a beautiful tasty rice, assuming they’re combined in an effective manner. 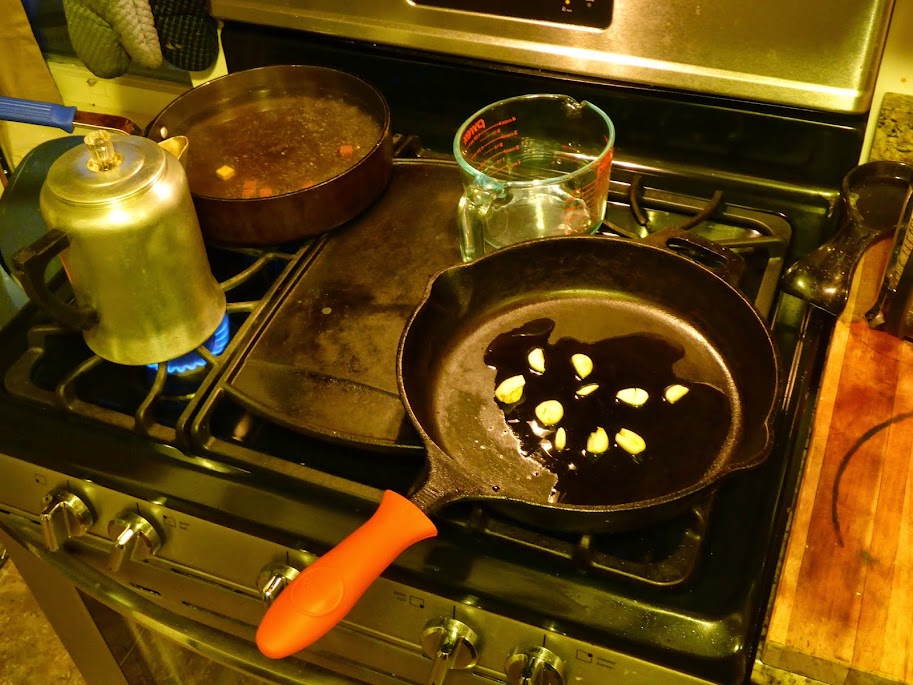 Smash your garlic on the flat of your knife, adding as much as you’d like. You’re going to saute the garlic until it lightly browns. Any more than that it will start to burn due to overexposure in the pan. For the record, my stove goes Lo-1-2-3-4-5-6-Hi. I had my burner set at 4. This will be oven specific but you really don’t need to cook at full blast. There is abit of subtlety to this.

Please note that there’s no rule that says you need to add ten cloves of garlic. I just happen to love garlic. Use less if you’d prefer. Although why would you want less garlic? What kind of monster are you?

Also, start your broth. Can you use your own stocks that you created from the discarded bones of organic chickens purchased at the farmer’s market? Yes, absolutely. You can also just use bouillon cubes and water – one cube per cup of water – especially if you’ve got three kids that you’re responsible for and a finite amount of time to prepare dinner. If you count there, you’ll see six cubes, and that’s because lots of experience has made me realize that I’m going to need more stock. My mother somehow does this with four cubes and four cups but it takes me more.

Finally, reheat what’s left of this morning’s second pot of coffee. Just because you’ll need something to do while you wait.

Step Three: Recognize When It Is Time To Add The Rice 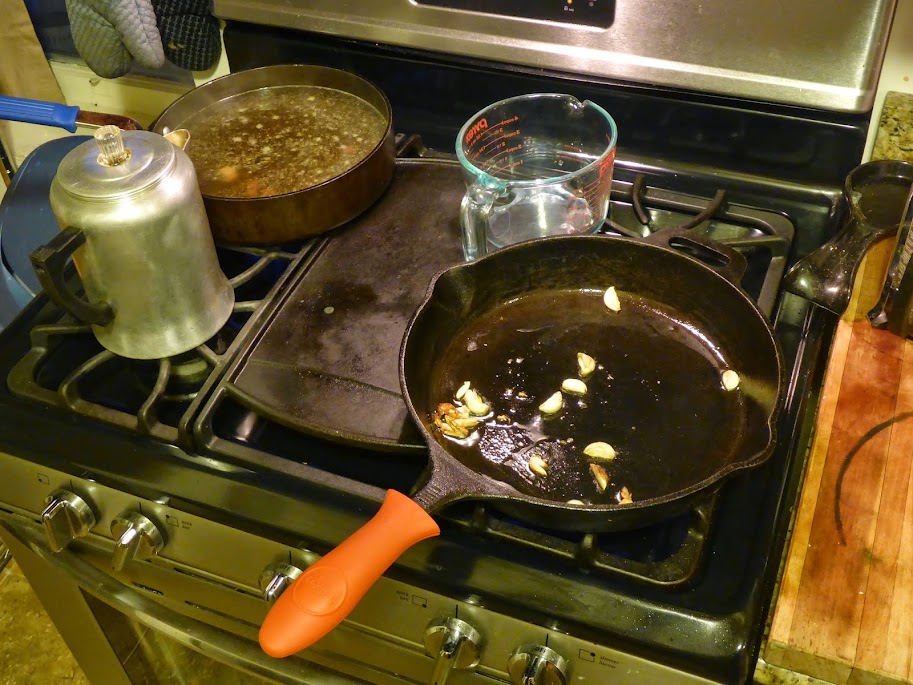 Newsflash: That Garlic Is Almost Too Brown 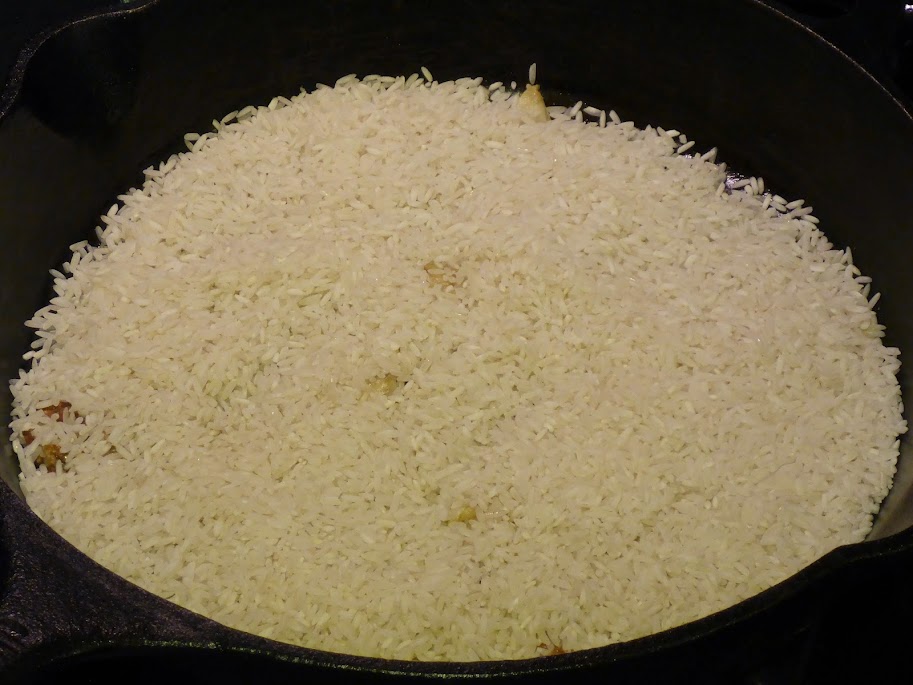 This is uncooked rice in a hot skillet with sauteed garlic and peanut oil.

Once the garlic has browned slightly, all of the rice should be added. If the garlic has burned, it has gone too long. If the garlic appears to be untouched, it hasn’t gone long enough. But once the garlic is browned, the rice can be added to toast. It will almost immediately sop up all of the oil, and from here, it needs to be turned regularly. Rice toasts quickly. An inattentive cook can easily discover rice that appears to have been entirely untouched by heat and rice that appears to have rested entirely within a hot flame. This is not ideal. Use a spatula to move the rice around for five to ten minutes. It will turn white, light brown (good), a slightly-less-light brown (you’re still okay), brown (you’re in the danger zone), and dark brown (abandon ship!). You’re striving for a slightly-less-than-light brown.

Step Four: It’s Time To Add Some Stock, Which Will Be Loud And Hot 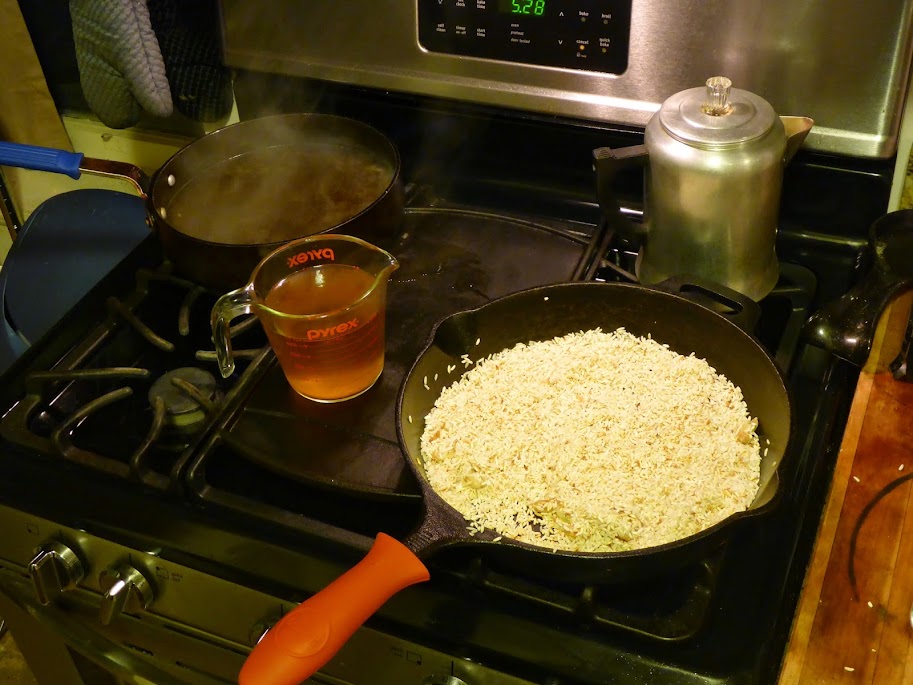 That rice has changed colors. Also, that’s two cups of stock sitting there. 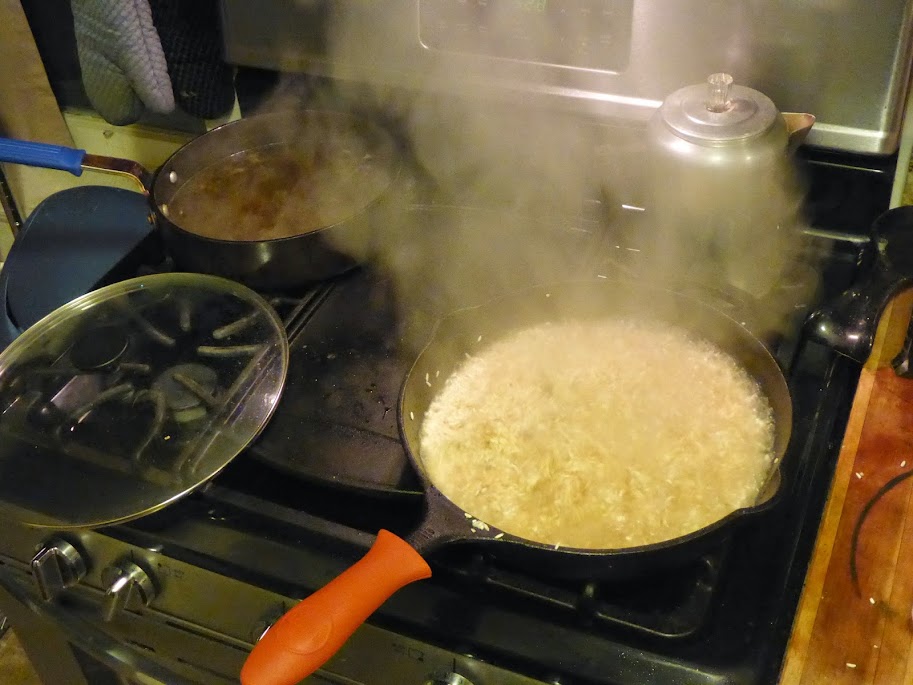 So Much Steam, So Much Noise! 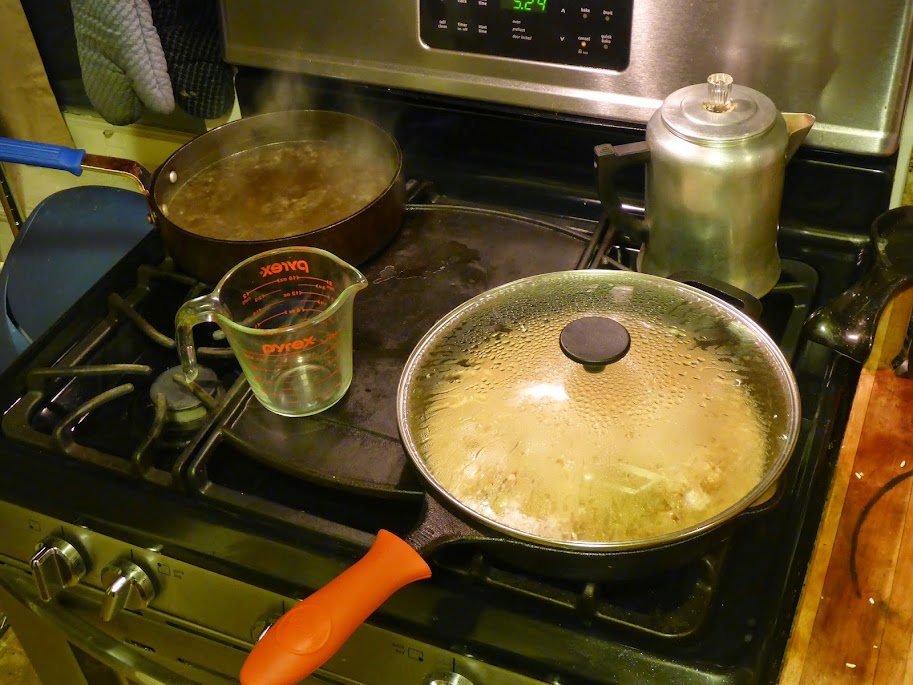 This will be what you’re striving for: hot broth in a hot pan covered up and cooking.

That pan hasn’t gotten any cooler since you added your rice. It should still be set at roughly 70 percent of your burner’s total capacity, perhaps a bit more, perhaps a bit less. But needless to say, things under that rice is hot. Once it appears that the majority of the rice has at least turned a solid white color, and ideally a slightly-darker-than-light brown color, it is time to add the stock. I spooned out two cups’ worth. It too is hot, as it will be nearly boiling.

Got that? Add the broth quickly but not dangerously, and for God’s sake, keep your extremities out of the steam. You can get burned doing this if you’re dumb. (Please Note: I have been burned doing this.) Once all of the stock is in the pan, cover and turn the heat down slightly. This broth will be either absorbed or evaporated within a few minutes. 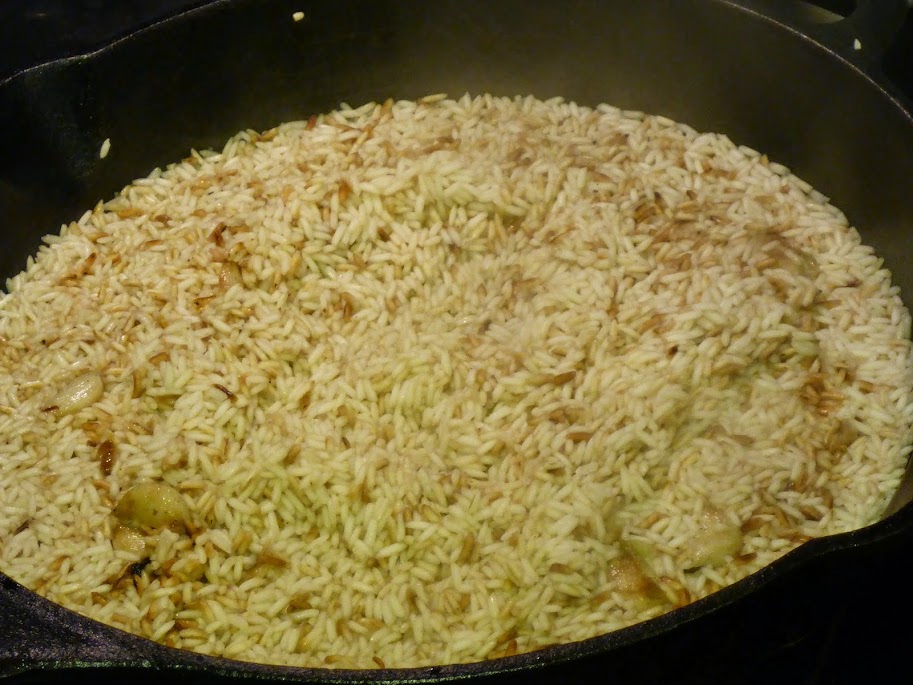 This is what the rice will look like after the first round of stock, something that should have taken maybe five minutes total to achieve. 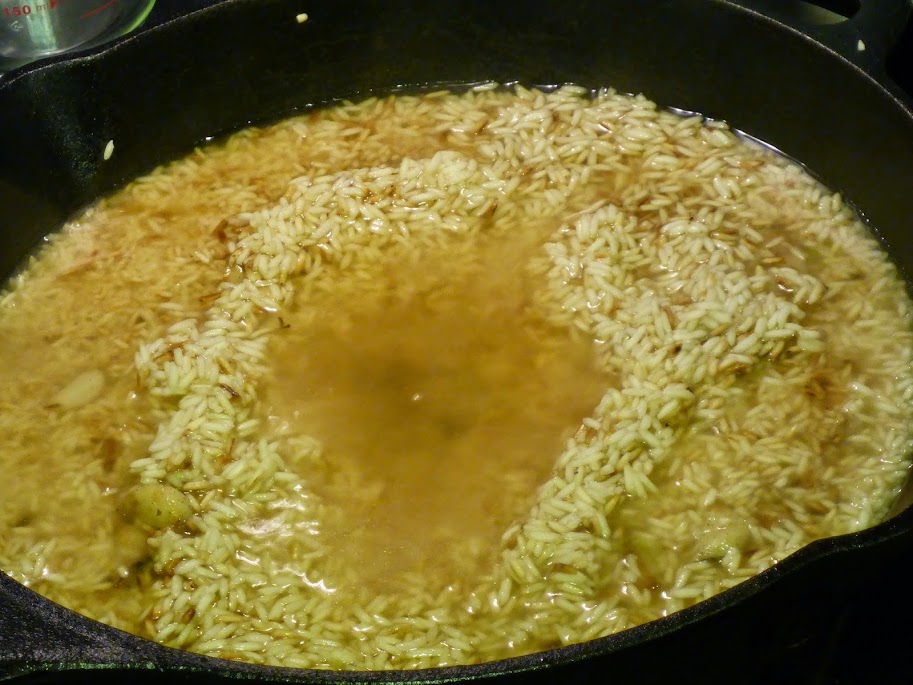 If you scrape the bottom of your pan, you’ll find that almost all of the liquid you originally added is gone. The rice itself has plumped up considerably, although if you were to try it, you’d still find it quite crunchy and unappealing.

However, once you discover that the first round of liquid is gone, you’ll need to add another two cups of stock. You’ll also need to turn the heat way down. If you were looking at 60-70 percent capacity before, you’ll want to be somewhere closer to 20 percent instead, and if you had the time, cooking at between 10-15 percent of capacity would be even better. I had my burner set at 1 here. Once you’ve added the second round of stock, recover the skillet/pan/whatever and wait.

The first round of stock cooked off in maybe five minutes. This will take you something closer to twenty minutes or maybe even a half-hour. Checking occasionally – maybe after fifteen minutes – will give you some idea of how quickly the second round of stock is cooking off. Don’t keep covering and uncovering though. Have faith that you’re not burning the entire meal and let the broth and its steam work its magic.

A few weeks when I watched my mother cook this, she ended up using an entire box’s worth of chicken stock (4 cups) and then just sort of added some more water when the rice wasn’t where she wanted it. Then she recovered, let that third round of liquid cook off, and served. Easy. 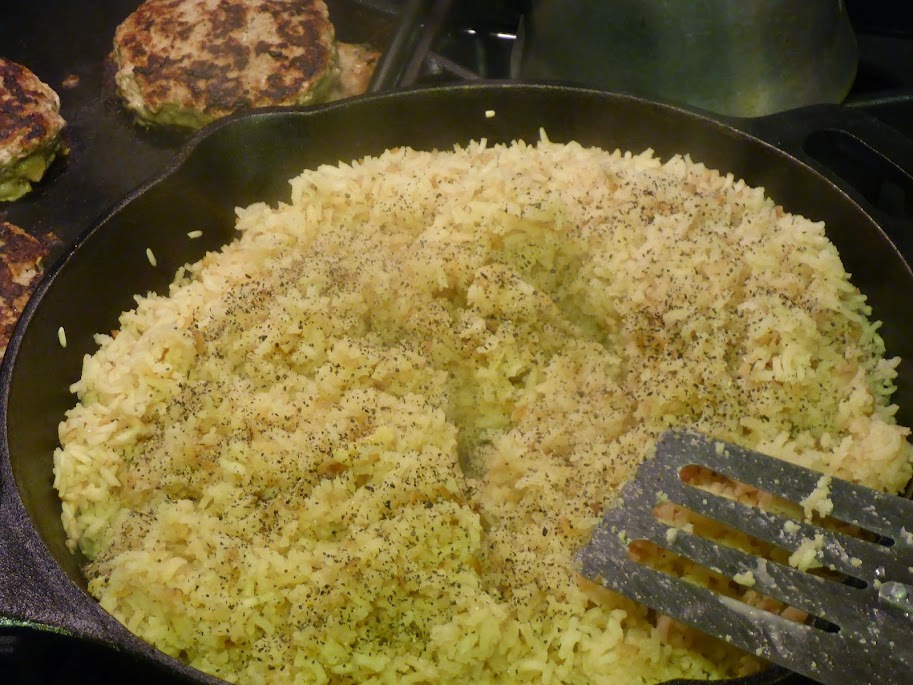 All The Black Pepper 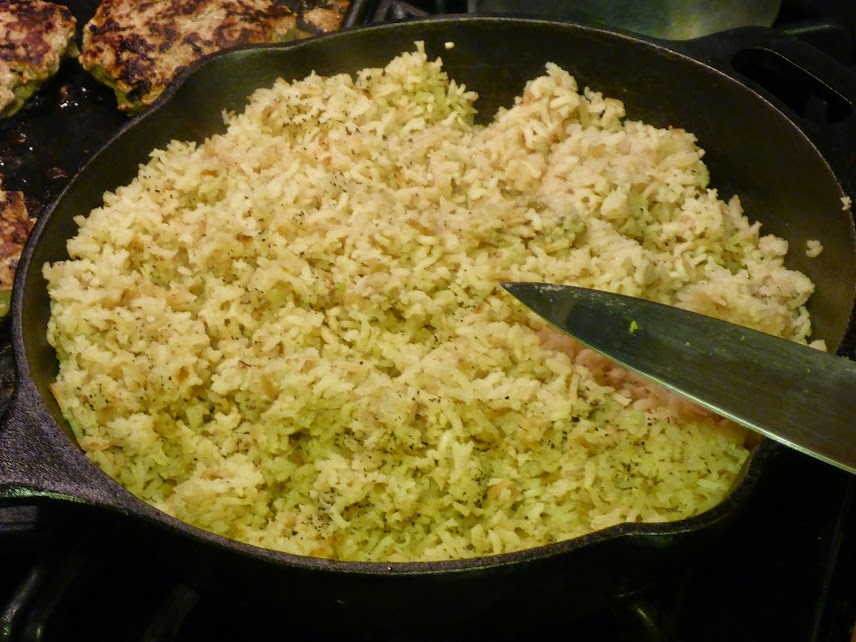 I really like black pepper, so I added it, then mixed it in. I didn’t add salt because the broth had done that work for me, although I’m not a huge salt fan. My wife will often insist we add a bit more. This though is entirely to taste. And as for anything else, I’ve never added it, but that doesn’t mean you couldn’t. This is a simple, basic recipe, and like all simple, basic recipes, it is very easy to make alterations – like some diced onions with the garlic, perhaps, or a different flavor of stock – without substantively affecting the final product. Consider this a sort of foundation to build upon, rather than a final product.

Incidentally: this was as close as I’ve come to approximating the mother’s recipe. Hers is still lighter and fluffier than mine but at a certain point, I have to start accepting that my pilaf will always be mine, and that means something that isn’t the same as hers.