How To: Make Meatballs

(Please note: if photos of raw meat turn your stomach, this isn’t going to go well for you.)

I traditionally make my spaghetti with hot sausage links. This is how my mother taught me and this is what I’ve always made for my family. But a few years ago, my daughter gave me her cutest possible look and then asked me why we never had meatballs. I didn’t have a good answer, and because I’m a sucker for her requests, I resolved to figure out how to make an acceptable meatball, which in this case should be understood to be one that she would eat. I did what all wise cooks do: I asked other cooks I knew for their advice. I then cobbled that advice (“Use meat!” “Brown it then sauce it!” “Oregano ain’t half bad!”) into a working recipe that I’ve found produces a durable, tasty meatball. It is also, like all my favorite recipes, easily altered. In other words, this produces what might be described as a baseline, one that can easily be expanded upon to meet your needs. 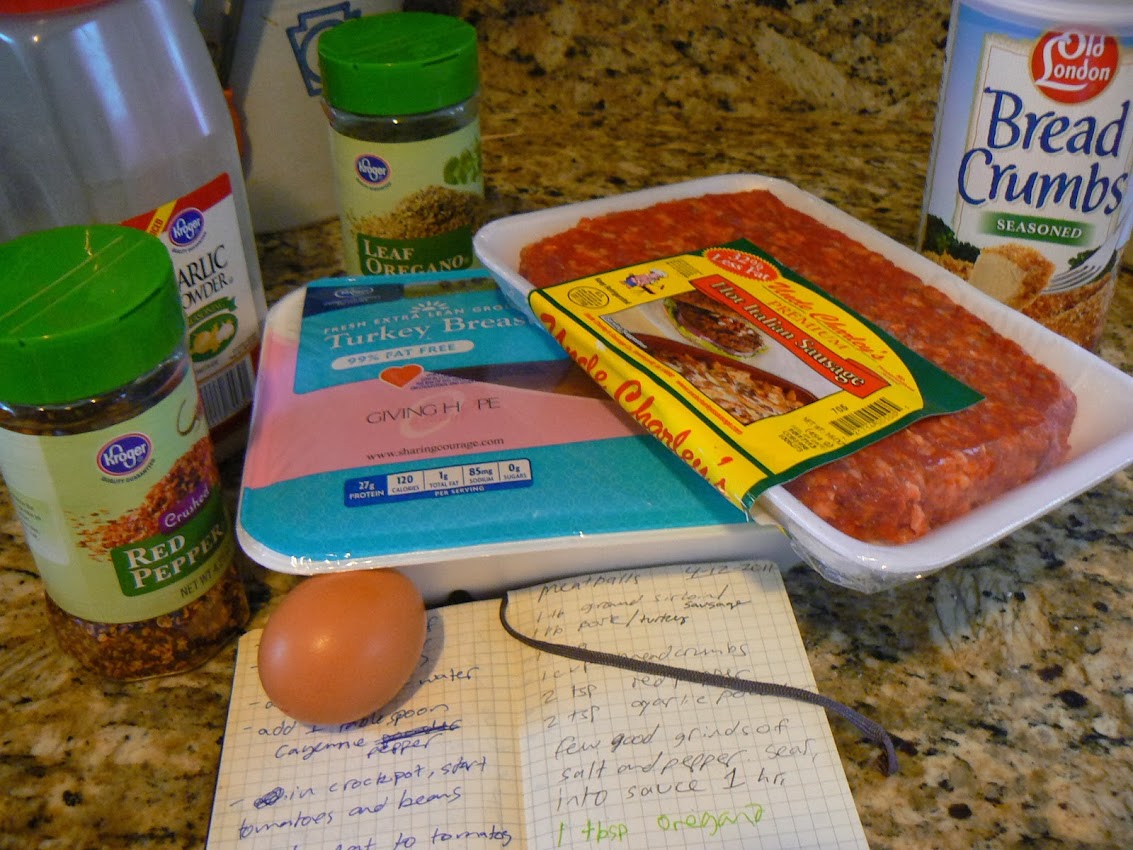 Unlike a meatloaf, which requires a 2-1 ratio of ground beef to whatever-other-meat-you-want-to-include, I’ve discovered that the most steady meatball relies utilizes a 1-1 ratio of mixed meats. I suppose we could avoid rations by just using a single kind of meat but no recipe suggested to me ever featured fewer than two.

If you can read the scribbles in the notebook above, you’ll see I started with one pound of ground beef and one pound of ground pork. My family though recently switched to using more ground turkey and my wife brought home ground sausage the last time the meatball request had been made, apparently assuming that I always used that in recipe. This was a happy accident. Although the 1-1 ratio is sacrosanct, the specific types of meat are not. Got something you really like? Go wild. You’ll also need all of the following: oregano, red pepper, garlic powder, an egg, bread crumbs, salt, pepper, and (potentially) some sort of additional fat if things are two dry (think olive oil).

If you’re squeamish about handmixing your foods together, stop that. Plunge in with both hands and squish this all together until you’ve got something that looks thoroughly mixed. If you look at what’s in the bowl and think, “That doesn’t seem very uniform in its mixedness,” then continue mixing until you don’t think that anymore. You want this to be thoroughly combined so that you’re rolling a consistently flavored meatball. 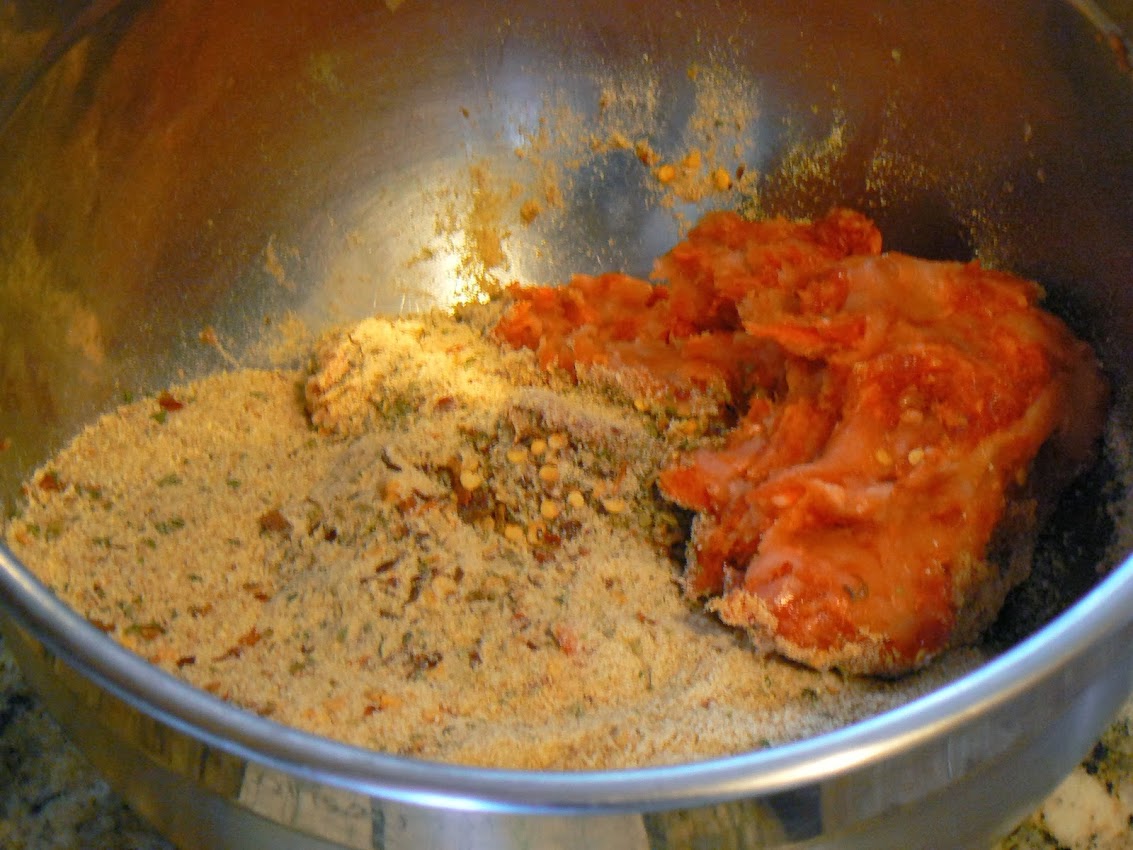 3. Once Mixed, Add The Other Ingredients and Thoroughly Mix. Also, Don’t Take Pictures With Meat Hands.

Once you’ve thoroughly mixed up the meat, add the following ingredients to the bowl: 1 egg, 1 cup of breadcrumbs, 1 tablespoon of dried oregano, 2 teaspoons of garlic powder, 2 teaspoons of crushed red pepper, and a grind of salt and a grind of pepper. You’ll see the consistently of the meat that you’re looking for there on the right (although it is blurry). You’ll see the pile of additional ingredients there on the left (although it too is blurry). Do not attempt to take photographs with meat covered hands.

Then, as before, start mixing aggressively. If you get the distinct impression that things are not throughly mixed after a few moments, continue to mix until they are. You want to produce a consistent product without pockets of breadcrumbs or egg or oregano or whatever else is trying to hang out by itself. You want a multicultural society in that bowl.

I mixed up this batch and realized that the 99 percent lean turkey I’d used was too lean. My mix was far too dry. What’s the solution? Fat, in this case, a bit of olive oil added to the mixture. Then I hand-mixed again. I was done when I had a consistent looking pile of potential food.

5. The Creation Of The Meatball

And now, the creating of the balls. No, wait a minute. That phrasing’s no good. And now, using the hands to create the balls! That’s much better.

I’ve attached a video above for those that are unfamiliar with how exactly to create a ball of food. I assume that most everybody knows, but for those that don’t, we’re looking to get a handful of meat and form it into a ball. All this requires is taking the desired amount (I probably take a 1/4 of cup’s worth) and forming it in the area at the base of our fingers. This involves a gentle squeeze, back and forth between the hands, for maybe a few seconds. I went a bit overboard in the video that I attached but I was trying to show the move. For the record, I tend to believe that the move matters; I’ve had less success trying to do the handful of meat rolled on flattened palms. The gentle squeeze tightens the product in such a way as it will not collapse, and we are trying to make something that will survive being cooked in sauce for several hours.

Please note that two total pounds of meat (a pound of turkey and a pound of sausage) plus the breadcrumbs and the other ingredients produced roughly 20 meatballs when using 1/4 cup’s worth of meat for every ball.

If you’re not married and feeding children, I can suggest that you might be able to skip this step. However, spouses (men and women) tend to be horrified at the thought of putting raw meat into sauce, because what if it doesn’t cook through and the entire family ends up eating FOODPOISONEDETTI?!?! Avoid the fight and brown these in a large pan before adding to the sauce.

I happen to have a ridiculous pan in which I could fit everything I made all at once. I cook the meatballs in a little bit of olive oil, flipping from side-to-side whenever they darken. This takes 10-15 minutes with a hot pan. You’re not trying to cook the meatballs through though. You just want to get them dark enough so that your spouse can assume that the next few hours in the sauce will finish them off.

7. See! Browned But Not Finished

If you look closely, you can see uncooked places on the meatball, but they’re well on their way to being edible. Again, we’re not talking anymore than 10-15 minutes in the pan. All that’s left is the transfer to your sauce of choice. 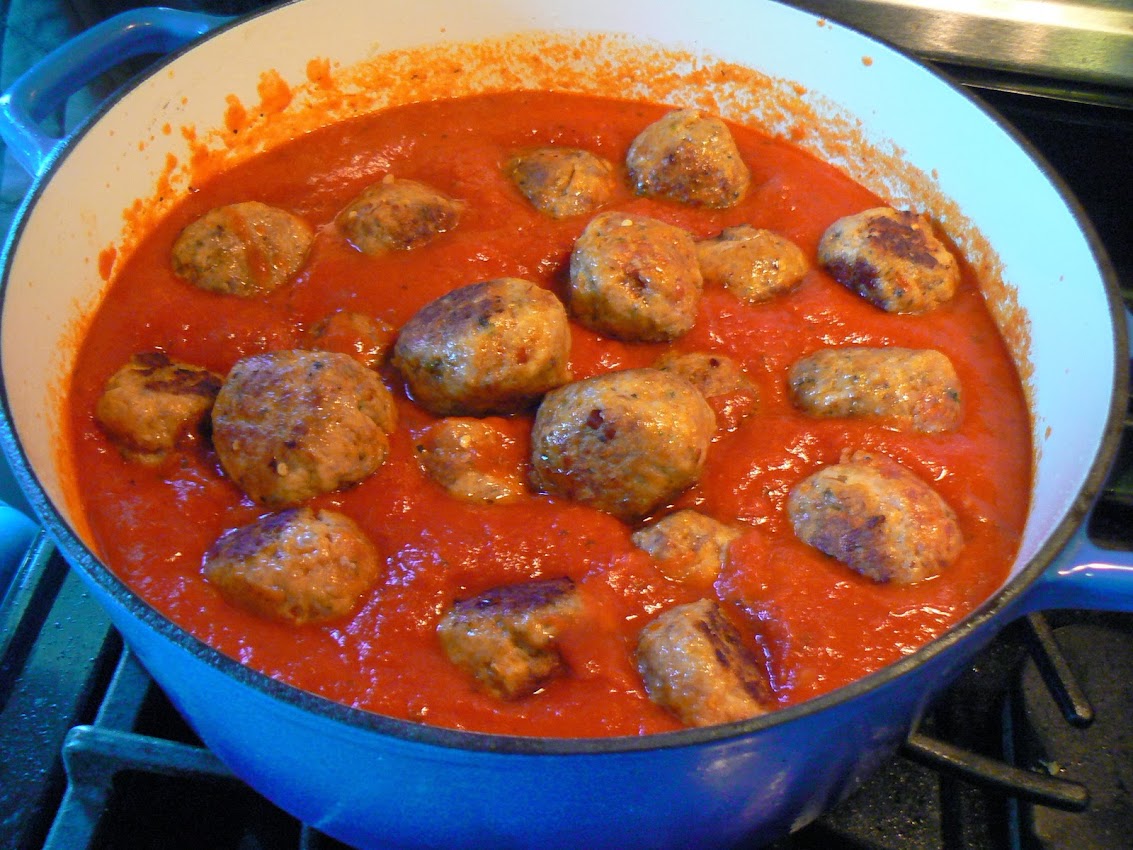 8. Put The Meatballs Into The Sauce, Stir Occasionally, Eat A Few Hours Later

If you weren’t going to put these meatballs into sauce, you’d obviously need to do something to properly finish them, but because these are going into a sauce, and because I was then planning to walk away for a few hours, save for the occasional stir, I had confidence that they’d finish up during that time. For the sake of spouses and children, cutting one open before serving isn’t the worst idea, but two hours at a low temperature in a covered pot is more than sufficient to finish what you’ve started.

Wrap-Up
Again, this is a baseline meatball. Like them spicier? Double the crushed red pepper. Want to stretch out the recipe? Double the bread crumbs. Want more garlic? Double the garlic. Want something else? Add it. This recipe will accept almost any imaginable alterations. The only keys are making sure you’ve got a sufficiently damp product after your thorough mixing process. If you’ve made something bone dry, you’re not going to recoup that anywhere else in the cooking. If you’re soaking wet, you’re probably safe to add some breadcrumbs and get a few more meatballs out of the recipe.

Needless to say, I recognize that this probably isn’t your grandmother’s recipe, and for all I know, I’ll be banned from Little Italys throughout the United States for creating this one, but as with all of my other How To posts, I know that what I’ve written here works, at least as a starter.