The judge as moral philosopher 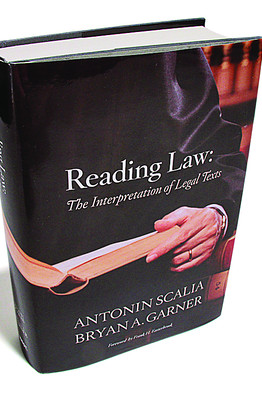 Reviewing Supreme Court Justice Antonin Scalia and Bryan A. Garner’s Reading Law: The Interpretation of Legal Texts in the Claremont Review of Books, David Forte exposes Justice Scalia’s famous legal positivism as moral philosophy by another name.  “They call false,” Forte writes of Scalia and Garner, “the ‘notion that the quest in statutory interpretation is to do justice,’” and they, like Alexander Hamilton, prefer judges to be “‘bound down by strict rules and precedents.”  But judging, Forte pushes back, is an inescapably moral craft.

But the maxim “no man should profit from his own wrong,” [the application of which Scalia and Garner dispute in the absence of a statute to that effect] which is a corollary to “no man should be a judge in his own case,” is an element of the rule of law itself, which can, in reason, suffer no absurdity or self-contradiction.  It is contradictory for a judge who personifies legal neutrality to decide a case in which his interests are at stake.  It is an absurdity for a regime of law that seeks to deter murder to embed an incentive to murder in its law [referring to the example of a orphan who petitions for his inheritance after murdering his parents].

These maxims are not moral rules drawn from some extrinsic standard and emplaced into the law by the judge’s whim; they are implicit in the nature of what is law, the determination of which is, as Marshall insisted, the essence of the judicial enterprise. If the command of the positively enacted law defines all there is to law, then the maxim (also from Lord Coke) that “the law compels no man to impossible things” would also have no place.  The irony of Scalia and Garner’s position is that it disputes the historical provenance of judicial review itself, namely Coke’s opinion in Bonham’s Case (1610) in which a parliamentary enactment was struck down as offending the maxim that no man can be a judge in his own case.

Writing in his Dissertation on First Principles of Government, Thomas Paine observed: “Every art and science has some point or alphabet at which the study of that art or science begins and by the assistance of which the progress is facilitated.”  This is true of the enterprise of judging.

Incidentally, I don’t think Justice Scalia disagrees with the basic nub of natural law arguments.  I don’t think he writes off Lord Coke as a shiftless foreshadowing of living constitutionalism.  Instead, Justice Scalia points out that we are no longer a new nation barren of laws.  The United States has matured since Chief Justice Marshall’s time.  Our land is now planted thick with laws, canons, maxims, and precedents.  It is thus both needless and dangerous for judges to presume we need yet another class of lawmakers.  It’s not an easy argument to dismiss.

Tim Kowal is a husband, father, and attorney in Orange County, California, Vice President of the Orange County Federalist Society, commissioner on the OC Human Relations Commission, and Treasurer of Huntington Beach Tomorrow. The views expressed on this blog are his own. You can follow this blog via RSS, Facebook, or Twitter. Email is welcome at timkowal at gmail.com.