All of Western Civilization Hates The Beatles So What’s the Matter With You?

You must be an American or something if you disagree because every piece of Eurotrash that ever crossed my path said they and their grandma stopped listening to Beatles back in 1957 or ’58 the latest. Sonic Youth, good band. The Smiths. Gruff Rhys, Super Furry Animals. It’s sort of like how America blathers on about John Locke endlessly but his home country ranks him a bit below, well, Robbie Williams as a philosopher.

Oy, even a UKTorygraph blogger viciously/deliciously delivers a death blow in his aptly named “The Beatles 50 years on: Sink the Yellow Submarine”:

The Beatles defined a new generation of pop music and made British culture cool, just as the Empire was sliding off the map. But it’s time to stop turning to them for inspiration or guidance. There is a gulf between the culture of these pampered baby boomers and today’s generation. The Beatles are firmly part of the old order and their music rings hollow.

Me, I’m still a Monkees man, but I kinda like the Beatles too. I feel so L7 at the moment, like time has passed me by. 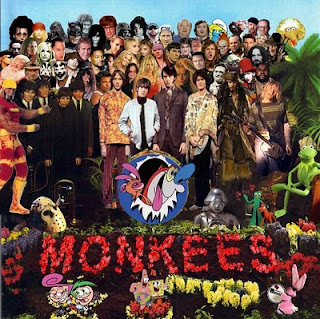