How To: Make a (Basic) Ground Beef Chili

An Opening Salvo
If you don’t already have your own chili recipe, you are a fascist.

To The Glory Of Chili
The autumn is approaching, and although I generally approach it in the same way that somebody approaches an upcoming root canal that will be performed sans anesthetic, there is at least one reason to be excited: chili. I associate the consumption of chili with the brisk fall air. I take this enthusiasm seriously; I have hosted a chili cookoff at my house for five years running, and will be hosting again in October (you’re all invited). I make probably ten batches of chili a season. I have a notebook full of recipes which I am forever tinkering with. I own multiple chili cookbooks.

But before we go further, I want to make this important point. I am neither a purist nor a dictator about chili. I simply want a warm meal, covered in cheese, and served with a good piece of bread. I do not balk at beans. I do not cower from tomatoes. I do not insist upon finely diced stew beef. Those that do tend to be overbearing and will only be briefly mentioned again here.

Preparation
A key observation: a chili recipe ought to be specific to the individual. Thus, I don’t often track how much of what I’m throwing in; I just try to make sure it’s there, so if I can’t taste it, I add more. I also tend to add whatever I’ve got in the house. Although there are some basics I insist upon including (ground up meat of some kind, chili powder, onions), those are specific to me and my needs. The joy of cooking is figuring out the recipes that work for you, not copying the ones that work for me.

Still, I made the following recipe earlier today, and I’d describe tonight’s batch as perfectly serviceable.

1. Back when I wrote this, somebody recommended keeping bacon grease in a coffee can in the refrigerator for later use. Done. 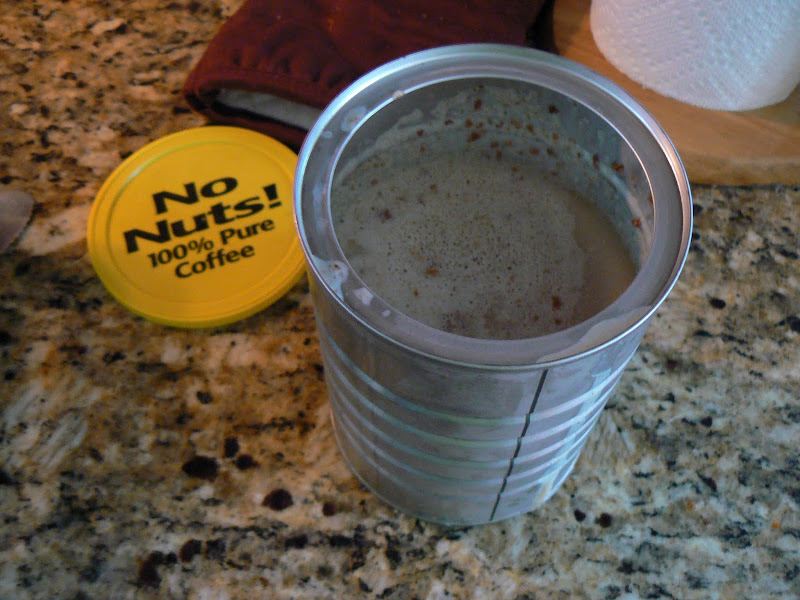 Depending upon the ground meat you use (if you do), you’re going to need fat in the pan. I was using a particular skinny ground sirloin, so I could see no moral objection to adding a reasonable amount of congealed bacon fat to the pan and then, after adding it, adding just a bit more. Y’know, just in case. 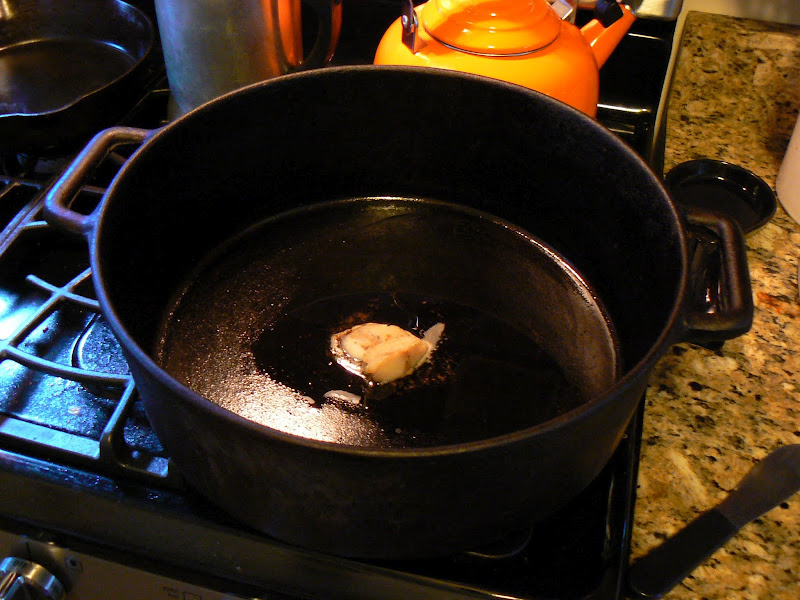 The bacon fat melted in the giant cast iron pot I was using. I then added onion. I know what you’re thinking. “Are those heirloom onions, picked by local fingers and rushed to the local farmers market to be sold to home chefs throughout your community?” The answer is yes. I chopped up two onions of precisely that description. Then I added another two onions from Aldi, no doubt picked eight weeks ago and treated with all sorts of poisons to keep them viable. I also added a handful of crushed garlic cloves. 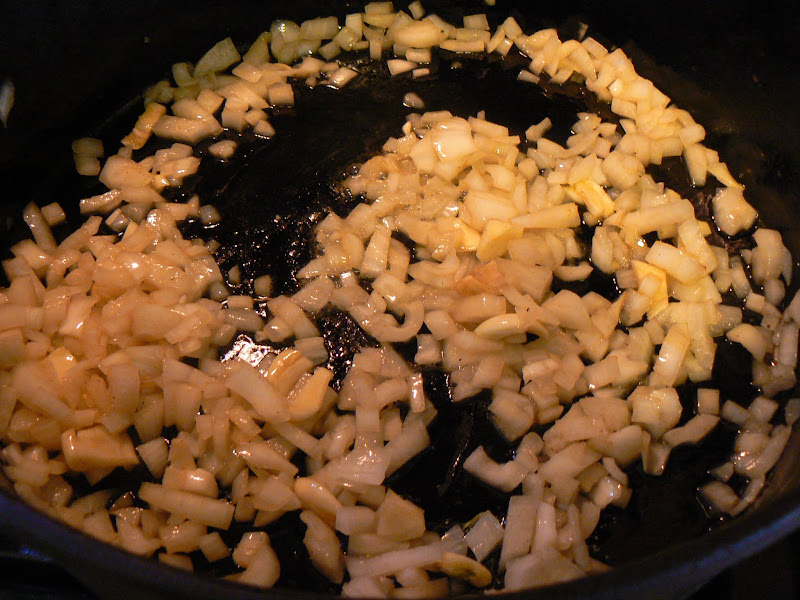 I cooked the onions and the garlic in the fat until translucent. That’s ten minutes, maybe, depending upon how hot the pan is.

2. I then added the aforementioned ground beef. I browned it slowly. (If you are a vegetation, simply skip this step.) As I was waiting for it, I made myself coffee, which I drank out of a vintage mug. 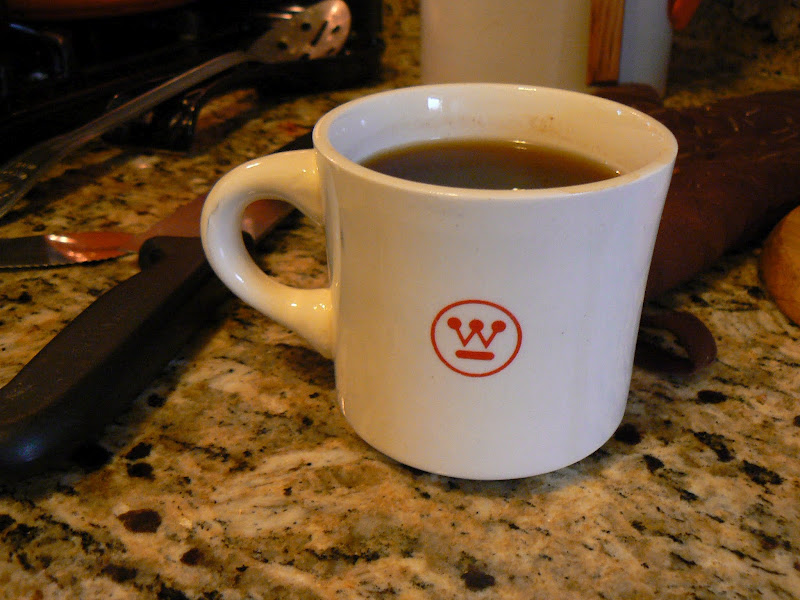 I don’t think the mug matters. Or the coffee. But both are delightful. 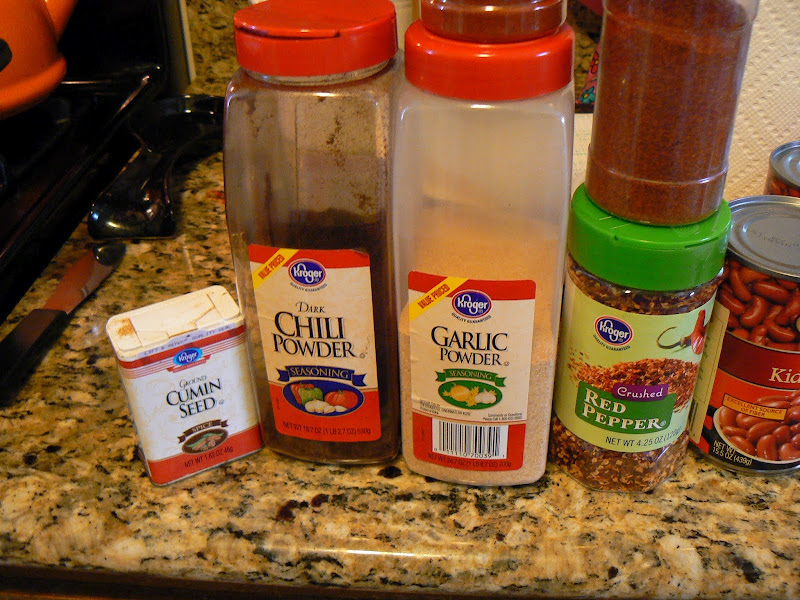 I didn’t add salt. The world kept turning, probably because of the saltiness of the bacon fat. When everything was added, it looked like this: 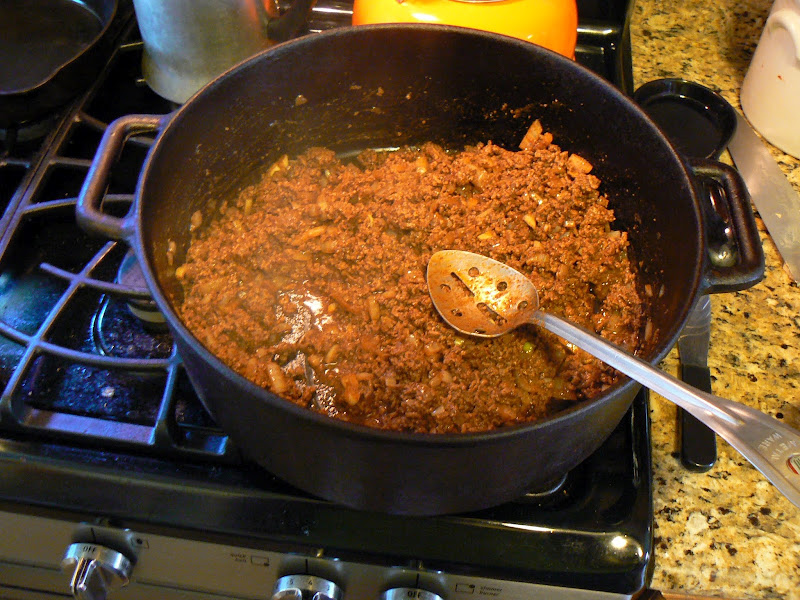 4. While I was drinking my black coffee (be a man!) and letting the spices meld with the onions and the meat, I went hunting in my pantry and found three cans of kidney beans, a can of tomato sauce, and a can of something called Fire Roasted Tomatoes, the last of which was labeled “Best Served by November 2011,” a suggestion that I ignored. The reality of chili is that I cook it for awhile, and because I’m not paralytically afraid of germs, I figured that between the three hoursish of cooking time and the fact that the can and its contents looked safe (THAT’S SCIENCE!), what bad could happen? I opened each, drained off the beans, and added everything to the pan. 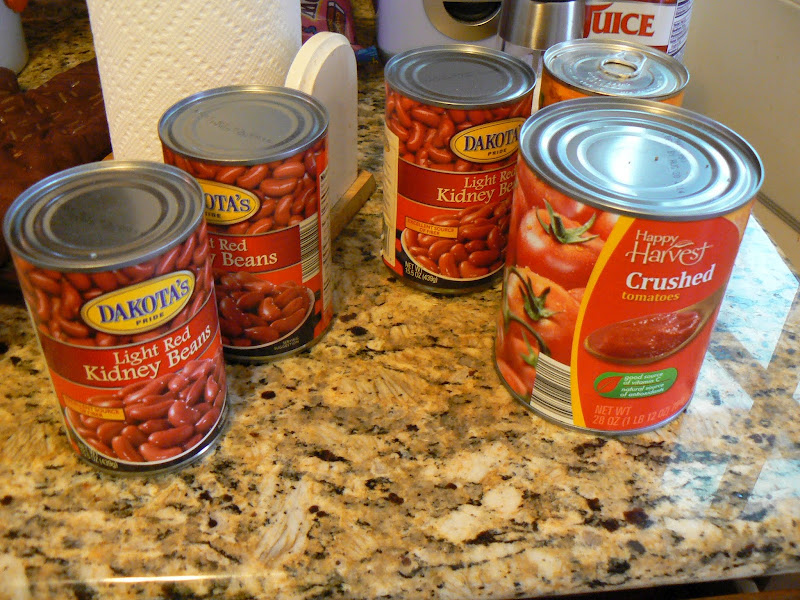 There are some chili chefs who’d treat several of the ingredients I included as a sin, to which I can only observe that I grew up with chilis made along the lines that I’m describing, that I don’t care, and that oh my god, get over yourself.

What I was left with was this: 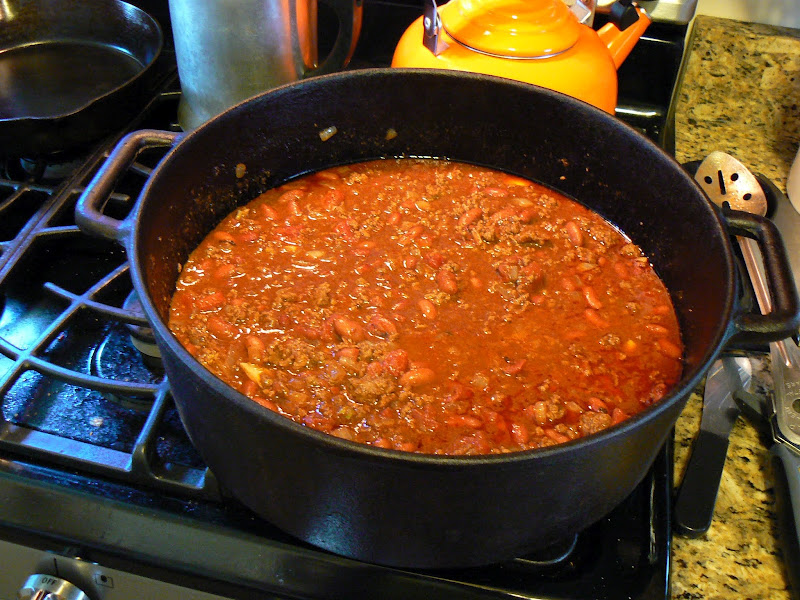 I turned the heat down to low, covered, and went to read a book. (Because this takes awhile, this entire concoction can be poured into a crockpot with the heat on low. Put it on warm and chili can cook all day and over night without damaging it.) In my case, I left it on the oven, returning every half hour to give the thing a vigorous stir, if only to make sure nothing was sticking to the bottom. The last thing I want is to take all of my excitement about the season’s first chili and flush it down the tubes by burning the damn thing.

5. After three hours, a few chapters, a brief nap, and some additional chili powder (let’s say 2 tbsp-ish more), I had reduced the chili down to this: 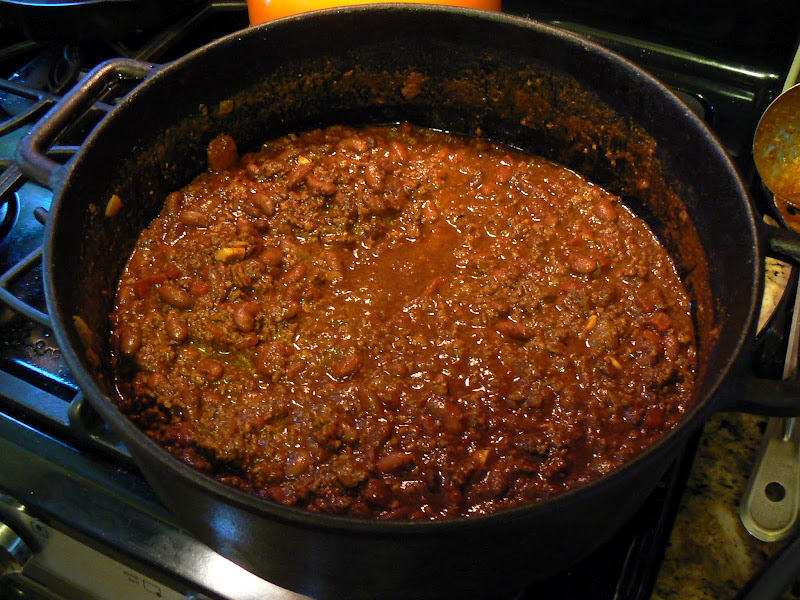 At this point, I just wanted to eat, so I smothered things with cheese, took a slice of sourdough bread that my wife wisely insisted upon, and got down to business. My apologies for the blurriness of this photograph. I only started taking pictures forever ago, so getting things focused really isn’t yet my forte: 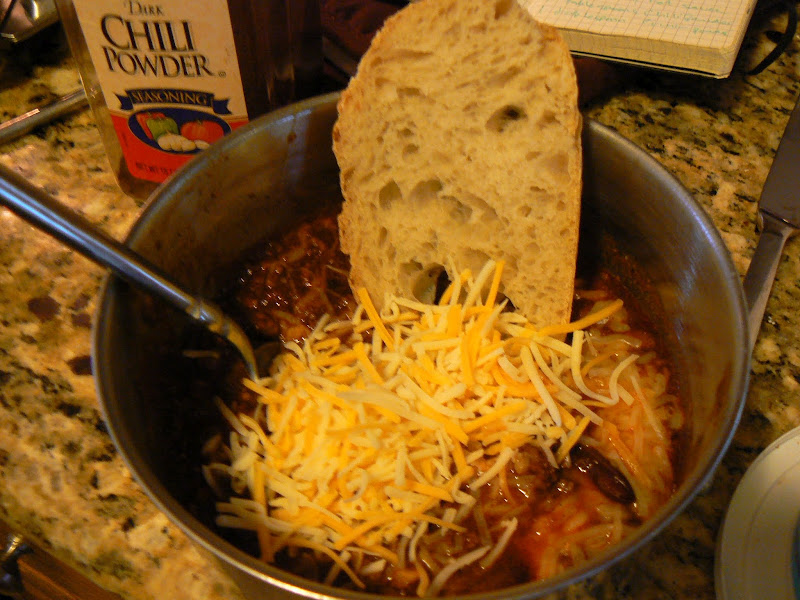 What I had for dinner then was a relatively mild chili that made for the perfect start to chili season. It tasted good enough to keep me coming back for more. It tasted basic enough to make me think that I could improve upon it with ease. It was, essentially, a starting point on the road to something better.

The Important Takeaways
I had a professor who insisted on finishing every class with a very brief recap of what he called the day’s Important Takeaways. It’s now a phrase I use, annoying myself. Still, here is what I want to emphasize when it comes to making chili:

-Make chili often, if only because it is delicious.

-Something that’s cooking on the oven for a few hours can’t really be screwed up, especially if caution is involved. For those more than a bit cautious, half the amount of spice used and then experiment from there.

For The Sake of Argument
At the outset, I suggested that those without their own chili recipes were fascists. I don’t really believe that. But I do believe it something that people ought to be able to cook. It tastes good the first night and often better the second. A good batch can last for a few days, providing at least one meal and possibly a second, with the potential for lunches too. Finally, there aren’t many people who dislike chili, although those that do ironically are all fascists.

And, as the season is almost upon us, have at it in the comments with your own recipes.