How To: (Re)Season A Cast Iron Skillet

I am thinking right now about purchasing a winter jacket. It is a parka, built of two parts, each which can separately be its own jacket. So maybe it is more accurate to say that I am considering purchasing two jackets which can, Voltron style, create a larger, better, warmer third jacket. My objection is both the price, which is expensive by the standards that I have, and the quality, which some internet reviewer have objected to. I have standards dammit. Everything I purchase has to simultaneously be priced in such a way as I feel that I am getting my money’s worth while also last absolutely forever without giving me any headaches. My standards are what might gently be described as both cheap and high. This combination that rarely works well together. However, I have discovered one product that satisfies both: cast iron.

When I wrote my introductory post, I mentioned my love of cast iron and the ease with which one can (re)season a cast-iron skillet. Doing so cheaply and easily creates a piece of reliable cookware that will last…and last…and last. I mentioned my method for (re)seasoning cast iron but I thought I’d further illustrate what I was talking about, in case there is anybody here who for some reason doesn’t already have a well-maintained cast iron skillet. Although I doubt that. You’re all such classy, urbane people. 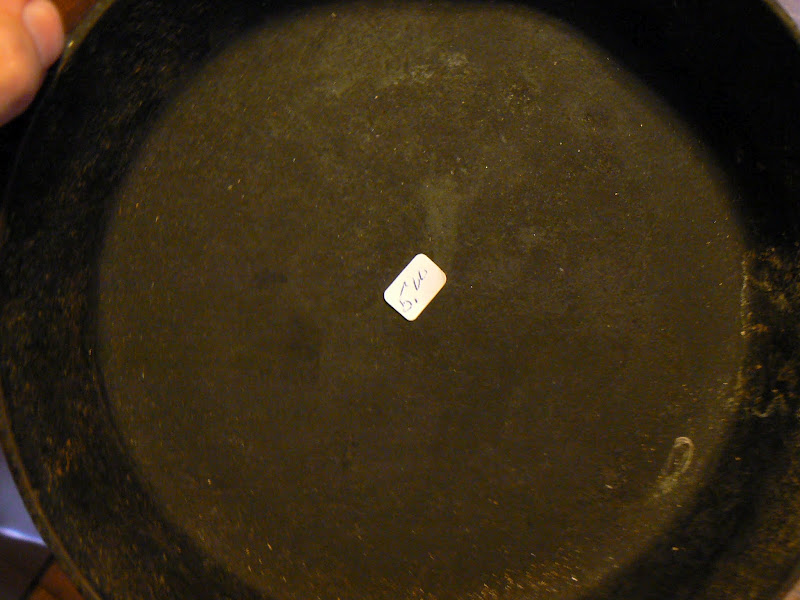 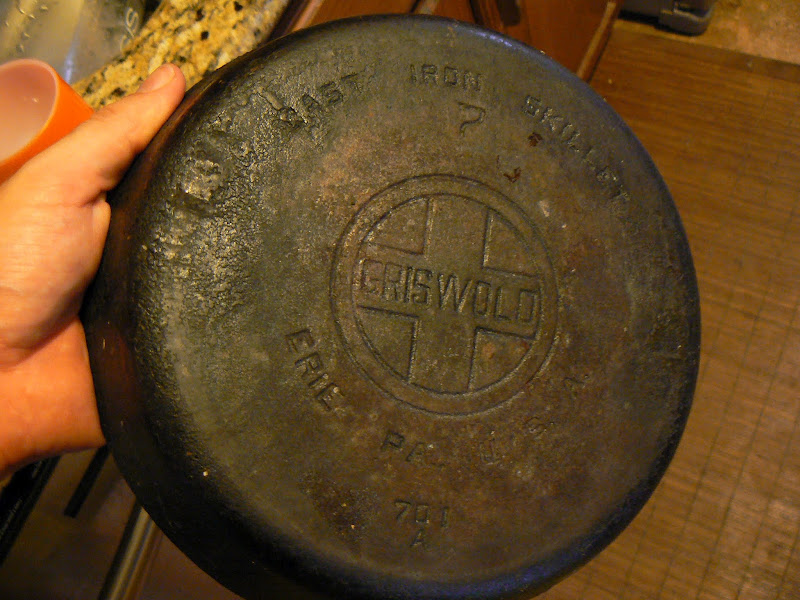 First things first: I found this specimen at a yardsale. For reasons I’m not entirely clear on, it was being ignored so that the patrons could paw at other dusty old things instead. For $5, I got a crusty Griswold skillet, possibly produced between 1930-1939, a big name here in West Virginia, but one that wasn’t moving the Mainers at the sale. My guess is that they didn’t realize it was sitting there. I would have paid $5 even if it hadn’t said Griswold on the bottom though.

As you can see, there is some rust, some gunk, a spiderweb, a sticker, and years of assorted other detritus built up on the skillet. The first step then is removing it all. There are lots of ways to do this, but the one I’m most fond of is sticking it in the oven during a self-clean cycle. Make sure that the area is ventilated. I let my oven go for two hours, with additional time for heating up and cooling off. (This skillet was relatively easy though. A tougher job might benefit from a longer stay in the oven.) At the end of those two hours, this is left:

Everything gummed onto that pan burned away in that time. Left behind was a lot of ash sitting on top of raw cast iron. This ash is easily removed, first with water, then with sandpaper, then with steel wool. None of this work is particularly arduous. The ash washes away and the rust comes off easily. What’s left behind then is this:

It is very difficult to stay ahead of the cast iron’s immediate desire to begin rusting. The picture above was taken two or three minutes after being sanded and run under cool water; already it had an orange hue. Do not worry about this though. Move on quickly to the next section and that coloration will not return.

The Skillet, During
Cast iron is porous. Those pores need desperately to be filled with something. That something is fat. Fill them sufficiently and the result is a generally nonstick surface that will withstand the use of metal cookware. In my particular recipe, I like using Uncle Charley’s Bacon. If you don’t have access to Uncle Charley’s Bacon, just remember: it’s not your fault. In its place, any preferred fat will work. At this stage though there is no skimping on it, whether oils or shortening or the aforementioned bacon fat is preferred. In other words, don’t use turkey bacon. Don’t use thin bacon. Don’t use healthy beacon (if such a horrible product exists). Use the thickest, nastiest, fattiest bacon available.

That bacon ain’t messing around. Neither was what was left after cooking it on both sides, such that so much fat was produced that what remained of the bacon ended up frying in own liquid fat. What is left behind are essentially inedible pieces of blackened bacon that are nasty beyond words.* The next two pictures aren’t for the squeamish or those concerned with maintaining their girlish figure.

By this point in preparation, it was my bedtime, so I waited for the hot fat to cool off a bit and I went to bed, leaving the liquid fat sitting in the skillet overnight. Liquid bacon fat doesn’t stay liquid. It turns into a viscous thing, squishy and gross. When heat is added it immediately re-liquifies. I suppose the image I’m about to show isn’t much better than the previous two, but it is far easier to spread this substance on the skillet than it is to spread hot grease. I reheated my oven (to 400 I think, although the number doesn’t really matter much) and smeared this nastiness all over the skillet. 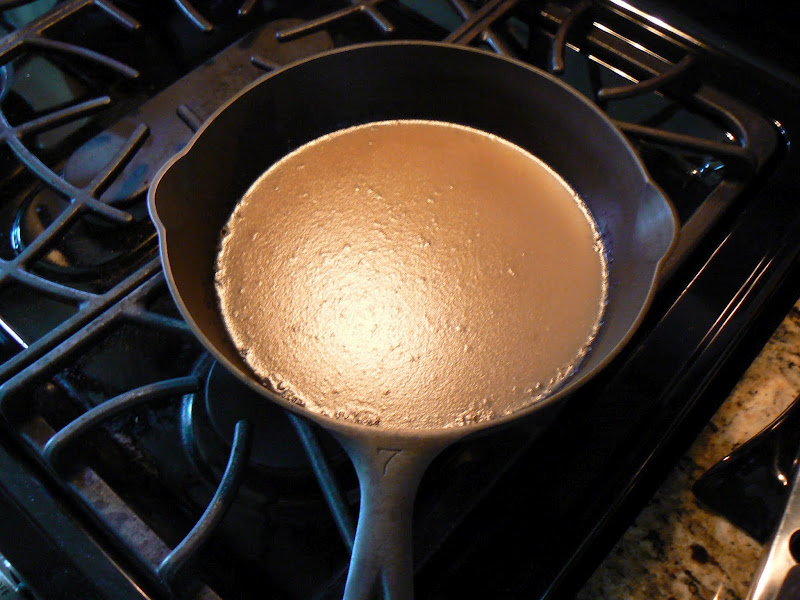 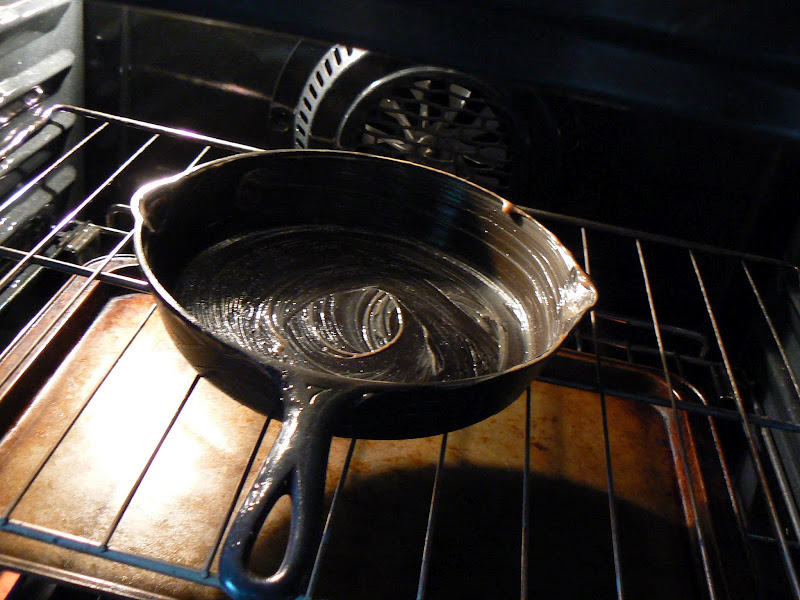 I then put the skillet into the reheated oven for 99 minutes but only because that’s what my microwave seems to think is the maximum amount of time that I might possibly want to keep track of. If numbers are absolutely necessary right now, the skillet should sit in an oven over 300 for at least 2 hours, give or take. Then I waited using some of the grease that was leftover to make home fries.

The Skillet, After
After my 99 minutes of additional cooking time, I took the skillet out to cool. While in the oven, blackened bits of bacon had come loose from the sides, and so removing some of that was necessary. There’s no sandpaper or steel wool necessary though. A paper towel took out most of the nasties and I left the rest for the next time whomever ends up with this skillet chooses to cook with it (I won’t end up keeping this one, only because I already have all of the skillets I could possible need). 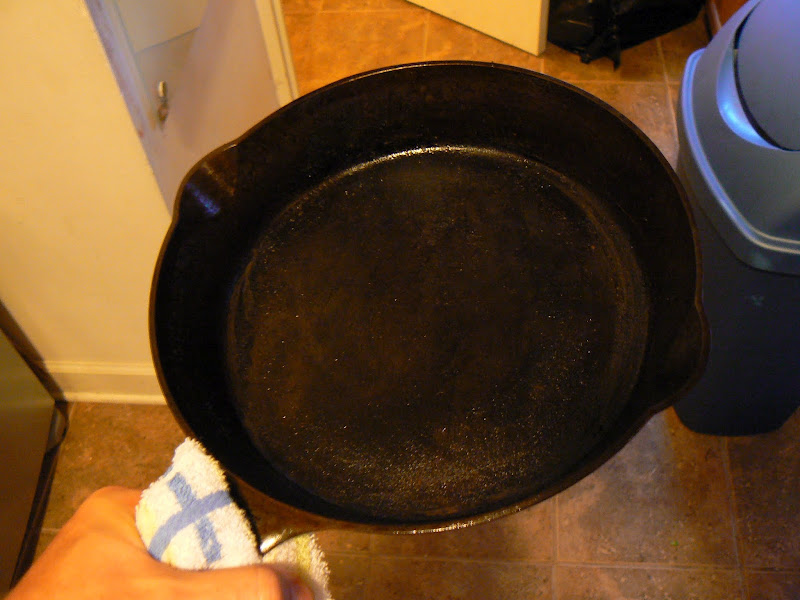 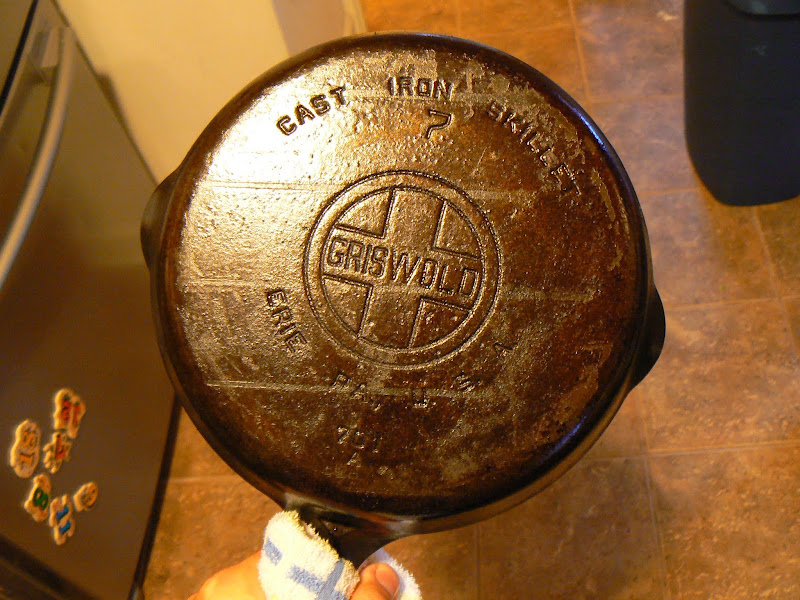 The total cost for this project probably came in at less than $20: $5 for the skillet, $5 for the bacon, plus time and energy and wear and tear. I could presumably give this skillet to my 11-year-old daughter at her wedding and it would still be in roughly the same condition, especially if I only wash it with warm water (but no soap, which can leach into the seasoning and then back out into the food) and if I then wiped it down with just a dollop of my favorite cooking oil. Or my daughter’s daughter. Or my daughter’s daughter’s daughter. The simple fact is that for $10 in real cash and a few more bucks in effort, I have something that will prove both useful and valuable for as long as I want it to be, satisfying my desire to find products that are both cheap and high quality. In most cases, such expectations are unrealistic I suppose, but in this one particular case, the sun shines down upon me.

*I still ate each and every piece. The next night. After it sat out all day. I am disgusting.