Swimming in the Shallows 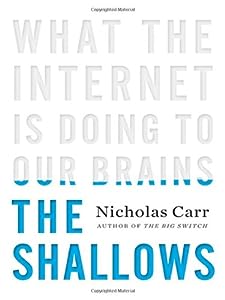 I’m a little hesitant to jump into another discussion about Nicholas Carr’s The Shallows, since I’m self-conscious about the fact that it’s in my top 3 Books I Somehow End Up Writing About Despite Never Having Read Them. But as unqualified as I am to critically assess Carr’s book as a whole, I am qualified to critically assess Emily St. John Mandel’s essay about the book. That’s because I’ve read it (the essay). Because it’s shorter. And free.

If Carr were to read this blog post, he might take the “shorter” part as evidence of his thesis: that large swaths of our society, having grown accustomed to living and breathing the Internet, have undergone a basic cognitive shift. We have become very good at organizing and sorting through rapid-fire packets of discrete, unrelated information, Carr argues, at the expense of our capacity for extended reflection and meditation. So it’s much easier for the 21st century digital boy to process 2/3rds of St. John Mandel’s essay, a few tweets about the upcoming midterm elections, a Facebook photo gallery and a YouTube video of a dog skateboarding than it is for that same digital boy to sit down and force himself to read a single chapter of Carr’s book without checking his iPhone.

(That’s not why I didn’t read Carr’s book — it’s just that I have a lot of other books I want to read. It probably is, however, why I will henceforth refer to St. John Mandel as “Emily.” I don’t know her or anything, but three self-contained words with capitalization and punctuation is a lot for my Internet-addled brain to get my fingers to type out every single time I want to refer to a person. It’s like trying to write a post about the White House in which you must always refer to the president as “President Barack Hussein Obama.”)

I was initially dismissive of the argument, and while my position is softened somewhat, “remapping the neural circuitry” still sounds like an overstatement to me. If the brain is as plastic as Carr suggests, how much reprogramming does it really need to switch from Twitter mode back to epic-poetry-and-long-woodland-hikes mode? When I spent two months on the road with limited Internet access, I was astonished by how quickly my brain adjusted to long, linear days of reading, walking, and idle conversation. Same thing happened to everyone else on the trip. My guess is the majority of people would see a similar result.

But while I’m skeptical about cognitive rewiring, I do think it’s possible for certain cognitive muscles to atrophy. That’s the true danger: not that Internet overuse will strip us of certain capabilities, but that it will give us too many alternatives to exercising them. To me, that seems like an unambiguously bad thing, but Emily doesn’t sound all that concerned. She writes:

But there, in the quote above: to me most valuable. The point, it seems to me, isn’t whether the Internet is “good” or “bad” for our brains. The Internet has changed us, just as the printed book and the typewriter did. The Internet sharpens us and makes us faster thinkers, more adept at shifting between tasks, even as it erodes our ability to focus on a single topic, a single work, for long periods of time. The point is that whether you think the Internet is “good for your mind”, or exactly the opposite, depends on your values.

I wouldn’t want to give up the sheer vertiginous over-stimulation of walking down a Manhattan street, any more than I’d want to give up the Internet. I live in a metropolis for a reason. But what if your work depends on the ability to fall into a state of deep focus for long periods?

Carr is the author of two other books, and has written for The New York Times, The Atlantic, and other publications. His degrees are in literature and language. Although he’s done his research, it seems to me that he’s approached this problem primarily as a writer—in other words, as someone whose profession requires the ability to close oneself in a room and remain utterly focused on the business of researching and completing a manuscript for hours at a time. For a writer, an inability to focus for long periods on the work at hand is at best an impediment, at worst a disaster.

The only problem there is that everyone shares at least one common responsibility: being a person. Exactly one thing separates a person from just another organism, and that’s our ability to look at ourselves and form judgments about our own thoughts and behavior. The ability to do that well — to be really self-aware — can give you a tremendous leg up as far as being good at being a person goes. But also demands a huge amount of focus; and it’s the sort of work that can be painful, scary, and oftentimes dull.

Of course, the Internet is rarely dull, and even 4Chan isn’t all that painful or scary compared to the prospect of burrowing through whatever serious darkness you’ve got stored up in the recesses of your mind. Instead of difficult, scary and convoluted, the Internet can be pleasant and numbing in a uniquely addictive way. Plus, when you emote online — and here I want to be careful to separate mere “emoting” from truly self-reflective work — the feedback and validation, both positive and negative, that you receive from the greater online community can make it almost feel like you’re spilling out your guts.** But when you project an image of yourself to people who only know that projection, nobody’s going to force you to dig deeper. The most qualified person to squint past that projection is you. To just work on refining it is an evasion of responsibility.

So I think the key here is to strike a balance. There’s nothing necessarily wrong with spending a lot of time on the Internet (or at least, if there is, remaining in deep denial about it is what empowers me to continue blogging). But for god’s sake, read books. Take long walks. Keep a journal — not a blog but a journal, something that other people can’t read. Even if the Internet is the shallows, it’s a vast enough pool to spend plenty of time exploring. We’ve just got to remember to do some daily laps in the deep end.

*#2 is David Shields’ Reality Hunger, and #1 is probably The New Testament.