No, I’m not talking about the Lions breaking their NFL record 26 game road losing streak even as I write this. I’m talking about Detroit Mayor Dave Bing’s plan to try to consolidate the population of Detroit by moving people from sparsely populated areas to higher population-density areas. It’s a great plan because it’s perfectly in line with my own thinking.

OK, full disclosure: I’m not an urban politics/policy specialist and have never studied the subject beyond occasional chats with folks who are such specialists and a bit of careful reading when I taught a course in state and local government. But I’m a political economy/public policy person in general, so I have some “I think not entirely idiotic” (TM) thoughts on Detroit.

Here’s the basic problem Detroit (emphasis on both syllables, please) faces: Its population has declined by more than 50%. In 1950, Detroit’s population was 1.85 million. Today it has, depending on which estimate you choose, between 821,000 and 910,1000. It has an ugly combination of low population density and low property value. A given population requires a given level of services–run that service over a larger area and it’s going to cost you more. That’s ok if you have high property values, which result in enough tax revenue to pay for those services. I.e., if your population is wealthy enough, they can afford it. But Detroit’s population density is only 3/4 that of Los Angeles, while LA’s property values are, at the most conservative possible estimate, more than 25 times higher than Detroit’s. (The median home price in Detroit is $7,500, the lowest median condominimum price available for any L.A. neighborhood is $190,000–other neighborhood’s condo prices range from $300k to $500k, and median prices for single-family homes are generally higher yet.)

In other words, Detroit is too many poor people living in too large an area to be able to afford to provide them basic services.

The population decline has left many Detroit neighborhoods dramatically underpopulated–50 square miles of vacant buildings and land. A 2009 survey showed just how much of the city has residential vacancy rates of 12-60%.

Abandoned homes invite trouble, from gangs to squatters. Detroit has long struggled with an ugly “devil’s night” tradition, in which arsonists set fires on Halloween. The problem grew through the ’70s and ’80s with 500-800 fires each year, declined in the ’90s after a vigorous public/government response to just over 100 fires, but increased again this year by 40%. Many fires throughout the year are set by squatters, either purposely or inadvertently as they try to keep warm in winter. And this year Detroit experienced a period of weather-driven wildfires that overwhelmed fire crews and destroyed close to 100 structures, including dozes of homes. Many Detroit neighborhoods look like war zones. 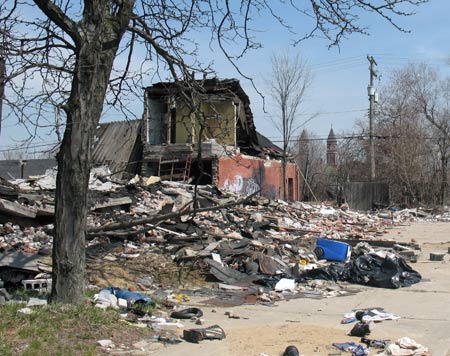 Detroit needs to either attract more people to fill in those vacancies (unlikely since, despite such low median home prices, its population actually continues to decline), make its population much wealthier (unlikely, due to low educational attainment, high incarceration rates, and the reduction in good-paying blue collar jobs) or start covering less territory.

That last option is really the only viable one, but, for most people, is shocking to contemplate. America is about growth and expansion. Shrinking is seen as failure, and worse, capitulation–giving up. But of course it’s not at all unknown for a corporation to shrink itself, selling or spinning off divisions to make themselves leaner, more efficient, and more profitable. Why shouldn’t a city effectively do the same?

The only reason not to is cost. Moving populations isn’t cheap–especially if the goal is to get them to move voluntarily, through incentives rather than force. Tearing down abandoned buildings and cleaning up the debris isn’t cheap, either. But in the long run it should be cheaper than trying to keep providing services to neighborhoods where more than half the houses are abandoned.

What to do with the vacant land? Although large parks would be beautiful, that’s not realistic. Detroit can’t afford to maintain and manage that much parkland, and in a place with as much gang activity as Detroit it’s not hard to imagine what would happen with large areas of un-maintained parkland. Still, one large scale park, along the lines of Central Park in D.C., Golden Gate Park in San Francisco, or Forest Park in Portland, Oregon. The region is known for large metroparks, so perhaps a multi-government (combo city and multi-county) authority could be put together to manage it.

One proposal is urban farms. Not hippie-lefty co-op farms, but full scale for-profit farming. Crops normally don’t grow well on land that has had buildings on it, due to soil compression, but perhaps there are ways to make it work. Perhaps livestock operations would work well.

Maybe areas that have been sufficiently cleaned up, and are sufficiently distant from the most dangerous neighborhoods, could be handed off to developers for free on the condition that they develop them within a set time frame. Why not sell them? Because you probably couldn’t, for any sufficient amount of money, and it’s better to just get the property back on the tax rolls as quickly as possible.

Another proposal I’d suggest, which would require state-level action, is to force neighboring suburbs to annex portions of Detroit. Although Detroit’s population has declined, the population of the metro area has grown. Detroit proper is a blighted mess; Greater Detroit is vibrant. Some, not all but some, of those suburbs are much better managed than Detroit and have a more stable and valuable tax base. They’d be in better position to redevelop blighted neighborhoods, and would have incentive to do so. That incentive is tied in with the fact that they’d have to be forced by the state to annex those areas–they don’t want them, so if forced to take them they’d probably try to make them more desirable fairly quickly, to preserve their town’s image. Of course if you look at the map above, most of the most blighted areas are in the interior, and places near decent suburbs tend to be more well filled in, and more decent, themselves. That limits the utility of this approach, but a) you can give them some of the more decent area in order to reach the more blighted area, and b) this would just be part of an overall approach of radically changing Detroit. Sure, I’m talking about actually dismantling chunks of Detroit and giving them away, but that’ what Detroit needs, so long as you don’t just give away the decent parts and leave the rotten ones.

God only knows if Bing’s plan will come to pass. Amazingly, some people don’t want to leave their home no matter how blighted their neighborhood gets. And this is a proposal in a city where the residents have no reason to trust any level of government. But with appropriate compensation, and perhaps the more heavy-handed tactic of just turning off services to certain areas, it can be done. And it’s possible that once an exodus from empty neighborhoods to less empty ones begins, it could reach a tipping point that results in a mass migration.

Detroit perpetually has its hand out to the state and the federal government, asking for help. But it has nearly always been asking for help in continuing on its present course. But if it proposes radical surgery of this sort, it would make sense for the state and the feds to provide funding to make it come to pass. Instead of funding on-going failed methods, we’d be funding a one-time capital project. It would probably be a lot less expensive than Boston’s Big Dig, and would have a much larger positive effect on a major American city.

James Hanley is a two-bit college professor who'd rather be canoeing.