Arizona is considering selling off its prisons as part of a larger process of balancing the budget.  Even death row would be privately run.  The state government predicts the move could save them $100 million dollars, which is a sizable chunk of change until you consider the budget shortfall totals over $2 billion dollars.  According to the New York Times:

Private prison companies generally build facilities for a state, then charge them per prisoner to run them. But under the Arizona legislation, a vendor would pay $100 million up front to operate one or more prison complexes. Assuming the company could operate the prisons more cheaply or efficiently than the state, any savings would be equally divided between the state and the private firm.

I can certainly see why governments would want to contract out the building of prisons, or some of the services surrounding the management of prisons.  But I get wary when we start talking about wholesale privatization of prisons or any other part of the legal system.  The whole “crime doesn’t pay” thing should apply to everybody, not just the criminals.  When we start profiting of the results of crime, a whole lot of bad incentives come into play, not the least of which is lobbying to keep current bad laws in place or to crack down even further on easy targets like non-violent offenders.

But there’s more to this story.  At the same time as prisons are being privatized, school budgets in Arizona face major shortages.  There’s talk of a number of schools being shuttered entirely, massive layoffs, and increased classroom sizes.  Last year, in my home town, every teacher with fewer than three years service, every art and music and extra-curricular teacher, every counselor and school psychologist, and a number of other education professionals were advised that their contracts would not be renewed.  They were saved by the stimulus.  This coming year, with no bailouts for the states, and with over $300 million likely to be cut from education and social services by the state – not to mention the falling local revenues from decreased home values and sales taxes – things look much more grim.

Arizona almost reached a deal to raise sales tax to shore up revenues, but it fell through.

I’ve spoken with a number of people about this, on both the left and the right.  There’s wide consensus that it’s a problem and that simply throwing money at it isn’t the answer.  Obviously we’re overspending if we’re relying on property tax revenues (which pay for most of our education expenses) from a housing bubble.  Revenues were artificially high, but if these cuts are necessary now then we obviously were spending too much as well.  On top of that, enrollment has fallen at traditional public schools as students have moved to charters and other options.  The public schools need to make cuts especially if they’re losing the classrooms.

Still, you hate to see kids pay that penalty for the mistakes of grownups.

So it’s time to start seriously thinking about education reform.  With a healthcare overhaul looming on the horizon, and the very expensive expansion of Medicaid threatening to deplete state budgets even further, it’s high time we started talking about ways to save money, generate better revenue streams, and find more creative and effective ways to teach our children.

Either that, or it’s time you started putting your money into the private prison market, because not only is Arizona making crime pay, it’s making it more likely that kids end up behind bars than in college.  Because that’s what happens not just when we underfund our schools, but when we don’t place enough value on our children’s education.  It’s not just about throwing money at a problem, it’s about acknowledging the problem and prioritizing its solution.  It’s about sharing the problem.  Socializing the problem, even.  I can think of no more compelling a reason to nationalize Medicaid than the fact that it would free up more of the states’ budgets to go toward education expenses. 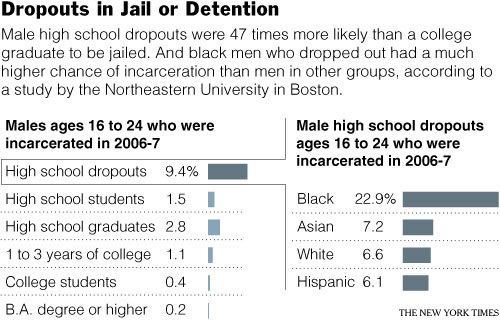 According to the New York Times:

Researchers at Northeastern University used census and other government data to carry out the study, which tracks the employment, workplace, parenting and criminal justice experiences of young high school dropouts [….]

“The dropout rate is driving the nation’s increasing prison population, and it’s a drag on America’s economic competitiveness,” said Marc H. Morial, the former New Orleans mayor who is president of the National Urban League, one of the groups in the coalition that commissioned the report. “This report makes it clear that every American pays a cost when a young person leaves school without a diploma.”

The report puts the collective cost to the nation over the working life of each high school dropout at $292,000. Mr. Sum said that figure took into account lost tax revenues, since dropouts earn less and therefore pay less in taxes than high school graduates. It also includes the costs of providing food stamps and other aid to dropouts and of incarcerating those who turn to crime.

There are no easy answers, of course, but the first step is to change how we value, as a society, our education.  Whether this means using school vouchers, paying teachers more, making unions better and more responsive or doing away with them altogether, or simply finding better ways to retain good teachers and get rid of bad ones – or any combination of all these and a whole host of other ideas – these are the questions that need to be asked.

Otherwise shareholders in prison companies are going to make way too much money.