The Prince of Nothing 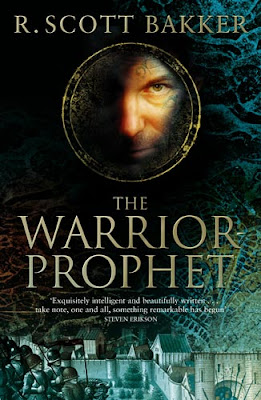 R. Scott Bakker’s debut trilogy, The Prince of Nothing, is one of the best fantasy trilogies I’ve read in a long time.  Despite it being a bit slow at times, and despite some of its darker elements – which can make even a hardened reader such as myself a bit squeamish and uncomfortable – the series is well worth the read.  Bakker’s prose is rich and vivid and brutal.  His characters are well realized, and the world he paints is as real as our own, and uncannily similar.

A few things about the books did bother me, and I’ve read similar criticisms elsewhere.  The characters were generally unpleasant people.  Unlike George R. R. Martin’s Song of Fire and Ice, The Prince of Nothing has nobody you’d really like to go grab a beer with.  Even a few of the arguably more villainous characters in Martin’s books you can’t quite help but like.  You might root for someone else if it came down to it, but you enjoy their villainy nonetheless.  Or you enjoy the threads of good that run through that villainy, making them less one-dimensional.

In Bakker’s books, even the “good guys” (I’m not sure there are actually good guys…) are hard to like.  Really hard to like.  This can leave you with a bit of a bitter taste in your mouth, however enjoyable the read is, and however well-written.  It’s very trendy to have anti-heroes and anti-heroics in novels these days, and Bakker takes it too far.

The darker sexuality was also a bit much for me as well, not because I’m particularly prudish, but because it’s very, very dark.  Uncomfortably violent.  And there’s not some pure, redeeming romance to offset the horrors of that violence.  There’s love, but it’s either one-sided and delusional, or desperate and unfulfilled.

Despite all of this, the books are powerful, dare I say literary works, like nothing else I’ve read in the fantasy genre.  For anyone not made too awkward by the grittier subject matter, they’re must-reads if you’re at all interested in the fantastical.  There’s a deep undercurrent of the crusades, of the clash of civilizations, throughout the novels – though it’s all very much its own world.  There is little reminiscent of medieval Europe in these pages, which is the typical prototype most fantasy authors draw upon, though certainly there’s a piece of ancient Rome here. Imagine a sort of pre-Christian Rome waging crusades against the Muslim infidel, and then add powerful sorcery and a few thousand years of dark history – the first apocalypse, the immortal, powerful yet insane Nonmen, the fallen kingdoms of the once-great North, a race of demons and their sorcerous allies intent on sealing the world off from the gods – all as background, a rich and dark tapestry of hinted-at events.

I read the fourth book as well, the first of the Aspect-Emperor trilogy, and found the change of pace very welcome, though I’m not sure yet that the shift in point-of-view characters is a good or a bad thing yet.  Certainly it’s not disappointing in the way that George R. R. Martin’s fourth (and long, long-awaited) novel was.  In fact, depending on where the fifth book goes, it may be an improvement on the first trilogy.

And that’s another thing Bakker has going for himself over Martin.  He writes these things fairly quickly.  You won’t have to wait a decade for the next installment to come out.  Thank God.