When I’m asked for my opinion on abortion (or when I give it unprompted) I have to decide how long a conversation I want to have.  If I want it over with, I use the crude political vernacular and say I’m a ‘progressive pro-lifer’.  If I don’t mind exploring the issue a little more I’ll say that in Seattle I’m pro-life but in South Dakota I’m pro-choice.  Which is to say that I believe a fetus has rights.  More rights than are generally acknowledged in more liberal circles, but fewer rights than are assumed in conservative country.

The fundamental weakness of America’s abortion debate is that an honest opinion is necessarily at least two dimensional.  Most voters agree — and current law requires — that a fetus’ rights increase over time.  And most voters agree that the rights of the mother depend on the circumstances of the pregnancy.  And yet our public discourse at its best relies on only one of these dimensions at a time, and at worst (and much more often) is 0-dimensional.  Are you ‘pro-life’ or ‘pro-choice’?  Pick a team.

To get a better picture of this problem, I’ve made a (crude) attempt at charting out a more complete picture of the competing rights of fetus and mother.  In an ideal world, when someone asked me my views on abortion, I’d pull a laminated copy out of my wallet and they could see the whole chart. 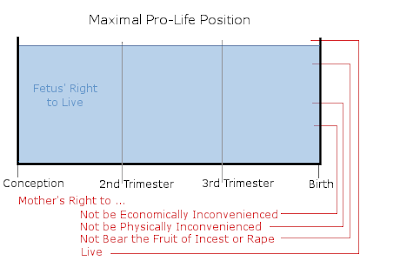 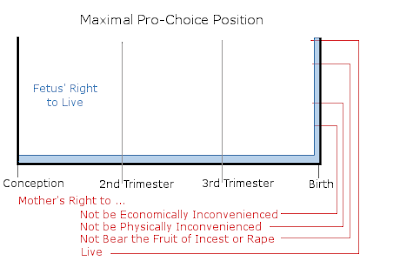 The maximal pro-choice claim is that the fetus has no rights until birth and can be aborted for any reason at any time.  The maximal pro-life claim is that the fetus’ right to live supersedes all but the mother’s own right to live (and perhaps not even that).  Of course it wouldn’t be an American political debate without false equivalence and lazy balance, and it’s worth noting explicitly that there really is no balance here between the pro-life and pro-choice sides.  The number of people who truly hold the maximal pro-choice view — that a mother should have the right to abort a fetus a day before due date on a whim — is vanishingly small, despite the heated rhetoric of many conservatives.  But a large number of people hold the maximal pro-life view, and indeed say so explicitly and believe it is a fundamental tenet of their worldview.

Unfortunately, it is difficult (in fact, likely impossible) to accurately gauge Americans’ opinion of abortion with existing polling.  The review of polling results on Polling Report shows that pollsters reliably reduce the dimensionality of the problem to meaninglessness.  Most of the polls ask the 0-dimensional question.  Are you ‘pro-life’ or ‘pro-choice’?  Occasionally, a poll will broach the topic of the circumstances of the pregnancy (‘legal under “certain” circumstances’, etc) or of the timing (‘do you favor or oppose this part of the U.S. Supreme Court decision making abortions up to three months of pregnancy legal?’) but never both.  This is the primary reason that abortion polling seems schizophrenic and why abortion opponents and choice advocates should be cautious about touting particular poll results.  They’re likely to fill in the blanks of those questions with their own preferred interpretation.  For example, that Gallup poll in May that found that 42% of respondents claimed to be pro-choice while 51% claimed to be pro-life was greeted with much satisfaction by the conservative blogosphere and no small amount of gnashing in the liberal blogosphere.  As Ace of Spades wrote:

I get annoyed at the various “moderates” who demand an abandonment of the pro-life platform, claiming the position is unpopular and loses votes.

But this raises the question of what exactly the ‘pro-life platform’ is.  To the majority of conservatives, and presumably to Ace, it means the maximal pro-life position — that abortion should be illegal in all or nearly all circumstances, even in the first trimester.  The 2008 GOP platform includes this:

We support a human life amendment to the Constitution, and we endorse legislation to make clear that the Fourteenth Amendment’s protections apply to unborn children. We oppose using public revenues to promote or perform abortion and will not fund organizations which advocate it.

The word trimester doesn’t appear here.  The desired protection is blind to chronology.  But is that what the Gallup respondants mean by pro-life?  We don’t know, because they weren’t asked.  But there’s pretty good evidence that it’s not.  The same poll asked about the circumstances under which abortion should be legal.  Only 23% replied that it should be illegal in all cases, which would seem to most closely match the GOP platform.  A Time poll in August asked specifically about the first trimester, and only 10% of respondants agreed that abortion should be illegal in all circumstances in the first trimester.  A plurality (46%) believed abortion should be ‘always legal’ in the first 3 months.

In the absence of more specific polling, it would take a NateSilverian effort to try to tease out Americans’ true feelings about abortion, taking into account all components of fetal age and complications of the pregnancy.  But by combining data from the various polls (particularly ‘first trimester’ and ‘third trimester’ polling) and making rough guesses at what people mean when they say ‘pro-life’ and ‘pro-choice’, I’ve swagged out my best guess for the mean American opinion of abortion: 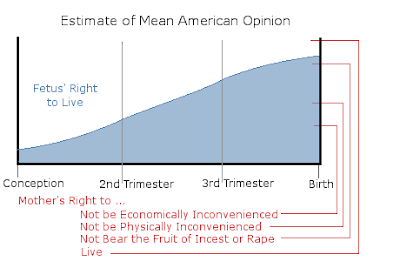 There seems to be widespread support for minimal restriction of abortion in the first trimester, but a strong sense that abortion in the third trimester should occur only under the most extreme circumstances.  For comparison, the original Roe v Wade decision produced this outcome: 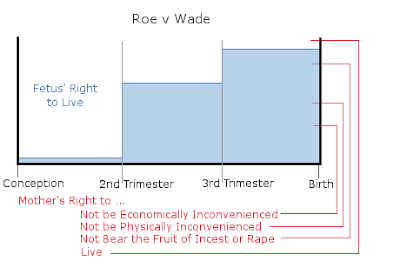 Note that this represents the maximum fetal rights allowed by law.  Any state could afford a fetus less right to life than this, but no more  (The 1992 Casey decision replaced the strict trimester formula with a standard of fetal viability, but the original standard makes for easier graphical representation and is still instructive).  If we overlay my estimate of public opinion with Roe v Wade, we get this: 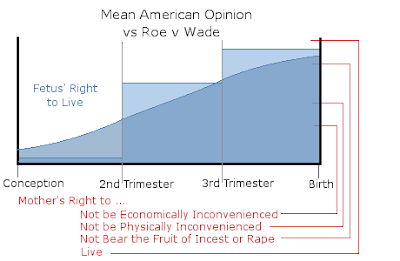 Assuming my estimate is correct, then we see that the Roe v Wade regime is more permissive in the first trimester than aggregate American opinion, and I suspect that it is this gap that abortion opponents are appealing to when they decry ‘abortion on demand’.

And finally, here’s a rough sketch of my opinion on abortion, overlayed on my estimate of mean American opinion: 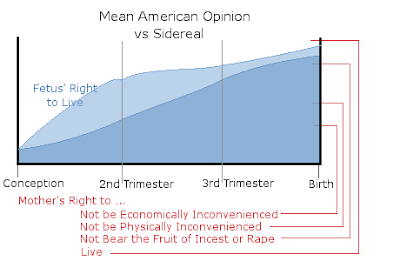 This is what I mean when I say I’m ‘pro-life’.  I’m inclined to assign a fetus more right to life and impose a greater burden on the mother to end it than aggregate American opinion, whatever that is.  But when other people say ‘pro-life’, they mean the maximal pro-life position.  And others might mean something in between.  And this is the essence of the degeneracy of this debate.  If we have reduced its complexity to labels and bumper stickers, we can’t possibly understand what each of us as Americans believes or desires.  It’s a tribalism that can offer the satisfaction of self-righteousness but is no road to policy or justice.