I’ve thought about this sort of community before, but I didn’t know anyone was trying something this radical….

VAUBAN, Germany — Residents of this upscale community are suburban pioneers, going where few soccer moms or commuting executives have ever gone before: they have given up their cars.

Street parking, driveways and home garages are generally forbidden in this experimental new district on the outskirts of Freiburg, near the French and Swiss borders. Vauban’s streets are completely “car-free” — except the main thoroughfare, where the tram to downtown Freiburg runs, and a few streets on one edge of the community. Car ownership is allowed, but there are only two places to park — large garages at the edge of the development, where a car-owner buys a space, for $40,000, along with a home.

As a result, 70 percent of Vauban’s families do not own cars, and 57 percent sold a car to move here. “When I had a car I was always tense. I’m much happier this way,” said Heidrun Walter, a media trainer and mother of two, as she walked verdant streets where the swish of bicycles and the chatter of wandering children drown out the occasional distant motor.

Vauban, completed in 2006, is an example of a growing trend in Europe, the United States and elsewhere to separate suburban life from auto use, as a component of a movement called “smart planning.” 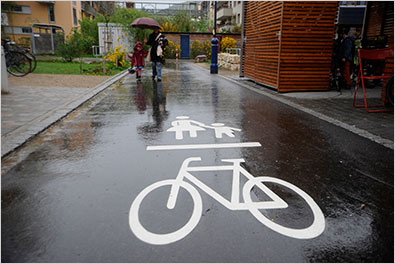 Interesting read.  I could certainly see myself living in a community like this.  In some sense, I have already – in family housing while my dad got his PhD.  The family housing was a car-free neighborhood with cobbled roads only and parking at the outskirts.  Of course this is an actual neighborhood, but I think I have a glimpse into a world without cars in our day-to-day lives, and I like what I see.  So localism is possible in many ways that are not the perfect vision of the “small town.”  It can happen in the big city.  It can happen in one neighborhood and not the next.  It’s all about how we create the infrastructure that supports us.  New urbanism must be coupled with “new transit” or “new logistics.”

In any case, I can see how a combination of fewer cars, more mass transit between cities, and more bikes and walkable spaces, paths, etc. within cities could be a huge gain for the environment, the community, the family, and the economy.