Willy Wonka and the Gospel Factory

Noah Millman while discussing the Where The Wild Things Are Trailer clarifies a point I was trying to make yesterday via a reference to one of my all-time favorites Willy Wonka and the Chocolate Factory.

I do not object in principle to taking a children’s book and making a movie for grownups out of it. That can be done very well indeed – well enough that, in spite of becoming a movie for grownups, it’s still a great movie for children. Gene Wilder’s performance as Willy Wonka, for example, is absolutely heartbreaking – and yes, that radically changes the story (the original book was Charlie and the Chocolate Factory while the movie is “Willy Wonka and the Chocolate Factory”, and that change is neither accidental nor incidental), but it changes it by recentering it, not by being false to it.

This idea of re-centering is how I think the Christian gospels are probably best understood.  In original liberal theology (i.e. early 20th century theology) this was taken to mean that the Jesus preached about the kingdom of God and the Church preached about Jesus as God.  According to that line of thought, this change is understood to be a false transformation.  This school of thought is connected with the whole historical Jesus Quest and the attempt to get to the “real” Jesus away from and underneath/back behind tradition-myth and all the rest.  That view is itself a certain kind of (classical) liberal myth I would say, but that for another day.  In short though, it’s (futilely) trying to route around subjectivity and intersubjectivity–something like say quantifying happiness.

But back to Wonka.

What I understand to be fundamentalists, particularly of the American Protestant variety, are like those who won’t admit that the movie re-centered or re-interpreted/shifted the frame from Dahl’s book.  It’s just true, no questions ever raised much less asked/considered.  And if you like there are reverse fundamentalists on the other side:  those who will admit of no change to the Dahl version (perhaps a liberal or probably better historical fundamentalism).

The alternative is the Millman option:  re-centered understood as both re-centering and true to.

**  An unintended (and I think potentially fruitful) consequence of this analogy is Will Wonka as Christ figure.  (At least as portrayed by Gene Wilder–again see Millman’s point on re-centering above).  If that seems odd at first–as it did to me for a second or two–we might recall the ways in which this was tried.  Both the horrible really bad no good awful ones (I’m looking at you 1970s Clown Jesus and not happily so) as well as the sublime.  The painting of George Rouault and his exposition of the clown as social mask as well as intimating the tradition of Jesus as holy fool (as in The Idiot by Fyodor D.). 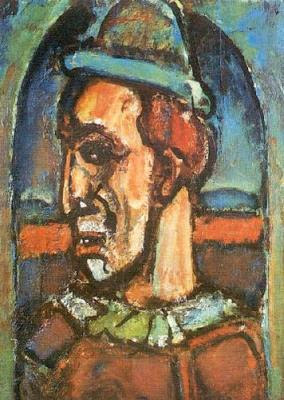