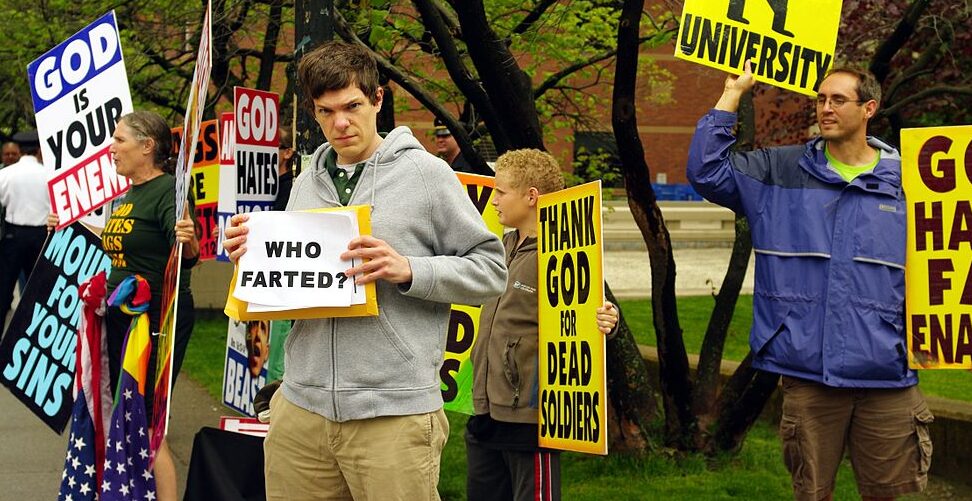 L1: The protection of unpopular speech is one of those rare issues that finds friends and foes on both sides of the political divide. Flag burning, kneeling, KKK parades- all examples of things that a large number of people find horrendous and distasteful, but which are permitted means of expression under the First Amendment. It means that you are generally free to pronounce even your most abhorrent views, with some exception, without fear of government authority. It’s the oft-repeated Evelyn Beatrice Hall quote: “I disapprove of what you say, but I will defend to the death your right to say it.”

Collectively, though, Americans were willing to make an exception for Fred Phelps.

The late and unmissed Fred Phelps was the leader of the Westboro Baptist Church, that vile group of evil people who traveled to funerals all over the country to mock and taunt the grieving loved ones at funerals of gay men and women, members of the military, police and fire personnel, and other prominent individuals. They would typically stand near the funeral site, holding signs with horrific slogans such as “thank God for dead soldiers” and other invective meant for maximum shock and offense.

The funeral of Marine Lance Corporal Matthew Snyder, killed in Iraq, was held in Maryland on March 10, 2006. Phelps and his small band of miscreants stood on public streets nearby, holding their signs. Matthew’s understandably angry and traumatized father, Albert Snyder, sued Phelps and his family members in federal court for defamation, publicity given to private life, intentional infliction of emotional distress, intrusion upon seclusion, and civil conspiracy. The first two claims were dismissed when the judge ruled that Snyder could not prove the necessary factual elements.

Following a District Court jury trial on the remaining claims, Snyder was awarded $2.9 million in damages. Phelps filed post-trial motions seeking to overturn the jury verdict and alleging the damages were excessive. He succeeded only in a reduction to $2.1 million. Turning to the 4th Circuit Court of Appeals, Phelps argued he was entitled to have had the case dismissed as a matter of law before trial on First Amendment grounds. Finding that the statements on the signs “were on matters of public concern, were not provably false, and were expressed solely through hyperbolic rhetoric”, the Appeals Court ruled in Phelps’ favor.

Snyder took his case to the US Supreme Court, who granted certiorari in Snyder v. Phelps, our case of the week. Chief Justice Roberts authored the 8-1 decision, from which Justice Alito dissented (Breyer concurred separately.) The Court’s analysis began by explaining that freedom of speech can be a defense to an otherwise valid claim of intentional infliction of emotional distress (IIED). But the Court further notes that determination can hinge on whether or not the speech is related to a matter of public, rather than private, concern, the former being “at the heart” of First Amendment protections. Further, wrote Roberts, precedent has held that not all matters of speech are of equal importance under First Amendment analysis: “That is because restricting speech on purely private matters does not implicate the same constitutional concerns as limiting speech on matters of public interest: “[T]here is no threat to the free and robust debate of public issues; there is no potential interference with a meaningful dialogue of ideas”; and the “threat of liability” does not pose the risk of “a reaction of self-censorship” on matters of public import.” (Quoting Dun & Bradstreet v Greenmoss Builders) Examples given of speech concerning private matters included dissemination of another person’s credit report and a government employer’s rule prohibiting employees from selling homemade porn videos. In both of these cases, the First Amendment right claimed was tempered by the Court’s finding that the “speech” was not of public concern.

The Court admits that the difference between speech of public and private concern is not always easy to determine. Nevertheless, the Court found that the statements on WBC’s signs are “plainly” related to topics of public interest:

While these messages may fall short of refined social or political commentary, the issues they highlight—the political and moral conduct of the United States and its citizens, the fate of our Nation, homosexuality in the military, and scandals involving the Catholic clergy—are matters of public import. The signs certainly convey Westboro’s position on those issues, in a manner designed, unlike the private speech in Dun & Bradstreet, to reach as broad a public audience as possible. And even if a few of the signs—such as “You’re Going to Hell” and “God Hates You”—were viewed as containing messages related to Matthew Snyder or the Snyders specifically, that would not change the fact that the overall thrust and dominant theme of Westboro’s demonstration spoke to broader public issues.

Therefore, the Court applies a stricter standard to determine whether the expression is protected. While recognizing that even speech related to public concern is subject to some government regulation- reasonable, content-neutral restrictions on time, place, or manner- the Court points out that, while Maryland now has a statute restricting picketing at funerals, no such law was in place at the time of the Snyder funeral. Phelps and crew had a right to be where they were, and what they expressed while in that place was subject to the “special protection” due to speech of public concern.

The Court next turned to Snyder’s claim of “intrusion on seclusion”. This is a type of invasion of privacy claim. Generally, it refers to a situation in which a person intentionally and offensively invades the privacy or seclusion of another, or of another’s private matters, resulting in emotional distress. Snyder argued that he was a “captive audience” to the Phelps clan, forced to see their message. This has been an important consideration in other cases, particularly Rowan v Post Office Dept. in which the Court found the First Amendment did not give a mass mailer of pornographic ads the right to deliver their “message” to a person’s mailbox, and Frisby v Schultz, upholding a city ordinance prohibiting the picketing “before or about” a person’s home.

However, the Court found that Phelps and his group were a fair distance away from the funeral and did not impede its occurrence. What’s more, Snyder admitted he could only see the tops of the signs, and did not realize what they said until he saw it on the evening news later. Therefore, the “captive audience” doctrine was inapplicable. Having found against Snyder on both the IIED and the intrusion on seclusion claims, the conspiracy claim which rested upon these other two claims was also rejected.

Speech is powerful. It can stir people to action, move them to tears of both joy and sorrow, and—as it did here—inflict great pain. On the facts before us, we cannot react to that pain by punishing the speaker. As a Nation we have chosen a different course—to protect even hurtful speech on public issues to ensure that we do not stifle public debate. That choice requires that we shield Westboro from tort liability for its picketing in this case.

Breyer’s concurrence largely agrees with the majority; however, he wrote separately to point out that even speech about public concerns could be regulated, if doing so was necessary in “proportionately advancing the State’s interest in protecting its citizens against severe emotional harm.” Because the funeral was not disrupted and Snyder did not see the messaging at the time, Breyer did not think the harm of the speech outweighed the First Amendment protection interest. He thus took a narrow view of the majority holding, one very specific to this case and fact dependent.

Alito’s dissent- one which the then-newly retired Justice John Paul Stevens said he would have joined and which Justice Ginsburg called “heart felt”- called the WBC’s “speech” a “malevolent verbal attack” that “brutalized” the Snyder family. He conceded the group’s right to publish books, spread their message on television, picket peacefully, post online, and otherwise disseminate their message. But it was his opinion that when a targeted attack like that on the Snyder family causes actual injury, the First Amendment should not offer protection from tort liability, noting that Phelps did not contest Snyder’s claims of the emotional injury suffered. Alito did not agree with the majority’s conclusion that the speech was related to public concerns but rather viewed it as a personal attack on a private figure, couched in language related to opinion on public issues.

L2: In the wake of the plot to kidnap Michigan’s Governor Whitmer by a group of men, the legality of militias- or illegality- is a hot topic. Are private militias legal? No… but kinda.

L3: Meanwhile, a fight is brewing over hamburgers in Texas, and it’s… juicy.

L4: Poll watching is legal; voter intimidation is not. Know the difference.

L5: During lockdown, Ohio temporarily joined 30 other states who allow the sale of “to-go cocktails;” the popular change is now permanent.

L6: The Ninth Circuit recently temporarily stayed an injunction against federal agents ordering reporters to leave the scene of protests. Last week, the Court lifted the stay, putting protections for the press back in place.

L7: Courts continue to weigh in on vote-by-mail fights in several states as election day looms ever closer.

L8: From ProPublica: the sad story of an esteemed judge’s mental decline, and the prisoner who pinned his hopes on her.

L9: In a superhuman feat, this lady finished part of the bar exam at 5, delivered a baby at 10, and finished the rest of the test the next morning.